Our Love To Admire (studio album) by Interpol 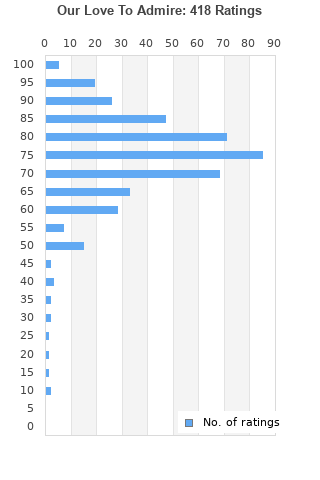 Interpol - Our Love To Admire [CD]
Condition: Brand New
Time left: 1d 2h 49m 37s
Ships to: Worldwide
$11.89
Go to store
Product prices and availability are accurate as of the date indicated and are subject to change. Any price and availability information displayed on the linked website at the time of purchase will apply to the purchase of this product.  See full search results on eBay

Our Love To Admire is ranked 3rd best out of 9 albums by Interpol on BestEverAlbums.com.

The best album by Interpol is Turn On The Bright Lights which is ranked number 83 in the list of all-time albums with a total rank score of 18,613. 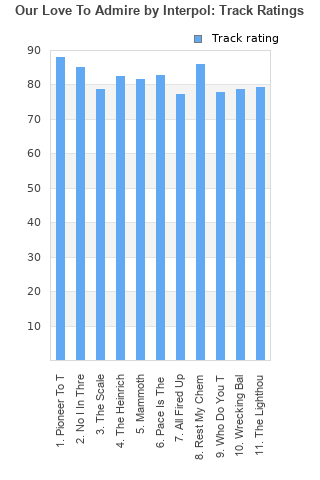 Pioneer To The Falls
Rating: 88 (95 votes)Comments:

Our Love To Admire rankings

Our Love To Admire collection

Our Love To Admire ratings

Rating metrics: Outliers can be removed when calculating a mean average to dampen the effects of ratings outside the normal distribution. This figure is provided as the trimmed mean. A high standard deviation can be legitimate, but can sometimes indicate 'gaming' is occurring. Consider a simplified example* of an item receiving ratings of 100, 50, & 0. The mean average rating would be 50. However, ratings of 55, 50 & 45 could also result in the same average. The second average might be more trusted because there is more consensus around a particular rating (a lower deviation).
(*In practice, some albums can have several thousand ratings)
This album is rated in the top 24% of all albums on BestEverAlbums.com. This album has a Bayesian average rating of 74.7/100, a mean average of 73.8/100, and a trimmed mean (excluding outliers) of 74.8/100. The standard deviation for this album is 13.7.

Our Love To Admire favourites

Our Love To Admire comments

Some people aren’t super crazy about this album, but I have a soft spot for it. Sure, it might not be perfect, but I still appreciate it. Here, we see Interpol expand their instrumentation, adding strings, pianos, and more into the mix. This was a much-needed progression for the band's sound, because if they released another album sounding like Turn On the Bright Lights or Antics, things might have grown stale.

Along with El Pintor, this is one of their more accessible releases. It is less dark and brooding than its two predecessors. As a result, it has a much brighter tone overall. I don't have a problem with this: in fact I’m glad that Interpol tried something new! However, there are some flaws that I notice now in retrospect. After the halfway point, I feel that quality gets a little bit spotty. Some of the tracks start to feel a bit weaker. But at the same time, the second half still features plenty of tracks that I really enjoy (“Rest My Chemistry” and “The Lighthouse,” to name a couple). Luckily things don’t crash and burn, and the album always manages to regain its composure when it stumbles. I am especially glad that this album ends on a strong note. On the previous two releases, the final tracks didn’t really feel like closing tracks – it almost made it feel like those albums ended in the middle of things. But here they finally nail it with a dramatic finish that wraps everything up perfectly.

I can see why some people might adore this record, but I can also see why other people might think that it’s just okay. Personally, I enjoy Our Love to Admire for its embellishment on Interpol’s typical sound. This is what really makes this record stand out as a solid entry in Interpol’s discography.

Songs 1 - 6 & 8 cover the essence of the album. Especially the first part of the record is extremely consistent and sometimes even 9+. Tracks 7, 9, 10 & 11 are more fillers than killers in all honesty.

All Interpol fans, even though you may "hate" this album, and this album was not well received, I tell you if you listen to this enough times, this album becomes a masterpiece. With the vocals, to the guitars, to the track layout, everything is as it should be. A great album, an Interpol masterpiece that will take you through many exhilarating and emotional moments in just 47 minutes. Just set aside your past feelings or thoughts of this album and absorb it. To me this was always the greatest Interpol album they have ever released.

Criminally underrated. Seriously, I don't understand. Such a great album start to finish

Man, some really incredible stuff here. It's no Bright Lights, but it's seriously heads and tails over most other stuff that was released this year. The Scale, Heinrich Maneuver, Rest My Chemistry -- Interpol maintains.

A bunch of songs that I don't find good or bad squeezed around one of my favorite songs ever (Rest My Chemistry).

Just me that thinks this album is incredible? Seemingly... it isn't Antics, but it has a much more modern taste to it. Not for all, but please for me!

Your feedback for Our Love To Admire