Turn On The Bright Lights (studio album) by Interpol 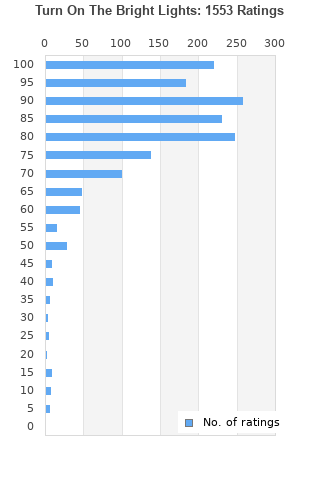 Turn On The Bright Lights is ranked as the best album by Interpol.

Listen to Turn On The Bright Lights on YouTube 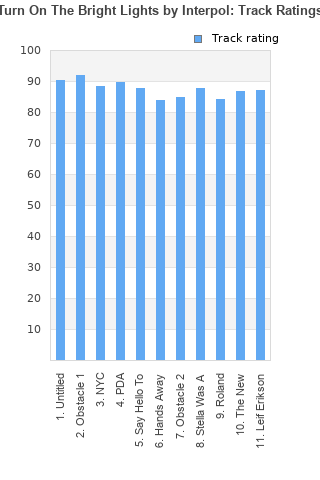 Turn On The Bright Lights rankings

Turn On The Bright Lights collection

Turn On The Bright Lights ratings

Rating metrics: Outliers can be removed when calculating a mean average to dampen the effects of ratings outside the normal distribution. This figure is provided as the trimmed mean. A high standard deviation can be legitimate, but can sometimes indicate 'gaming' is occurring. Consider a simplified example* of an item receiving ratings of 100, 50, & 0. The mean average rating would be 50. However, ratings of 55, 50 & 45 could also result in the same average. The second average might be more trusted because there is more consensus around a particular rating (a lower deviation).
(*In practice, some albums can have several thousand ratings)
This album is rated in the top 1% of all albums on BestEverAlbums.com. This album has a Bayesian average rating of 83.5/100, a mean average of 82.3/100, and a trimmed mean (excluding outliers) of 83.6/100. The standard deviation for this album is 15.8.

Turn On The Bright Lights favourites

Turn On The Bright Lights comments

Television with a U2 twist? More like Joy Division with an REM twist, if anything. It's unique enough for me to say that's just not fair though. My wife's been on an Interpol kick for MONTHS since I gave this one a 2nd spin in front of her....

This Band sounds very much like Television with a U2 twist. Not a bad album at all, it feels like that 2nd listen helped to understand this more.
Untitled, Hands Away and Obstacle 1 stand out.

If I ever ran into people like this, I probably wouldn’t hate New York as much as I do.

Songs alternate between choppy staccato guitar bounces and soaring open-ended guitar screams. Punctuated by tight drumming and cynical lyrics from the guy who just barely cares enough to hide what he really thinks of you.

A good album, but for me a bit overhyped. Obstacles 1 and 2 are great (especially 2), so is PDA.

Heard better albums and songs of this band. It was ok, but not spectacular.

I did not expect to enjoy this as much as I did. Interpol is post punk royalty.

Side A is absurdly good, some would say it sounds like Joy Division but for me its one of those post punk revival bands of the early noughties that managed the incredible task of coming out of the gate with a very deliberate signature sound. Totally worth a listen and if you dont like this album you probably shouldnt bother with the rest of their discography

This album is incredible. The opener of Untitled is just brilliant and one of my favourite tracks on the album and then this momentum is maintained throughout. Every song feels like it has its own personality and would work on its own as a single. The guitar work is beautiful at times and the quality of the drum work makes the whole album so multi-layered and gives you so much to explore in the record. I think the vocals are great as well and go under appreciated at times. The music is also so heavy at times and feels so powerful whilst you listen along. Overall, this record is one of the most complete and greatest albums ever made.

Your feedback for Turn On The Bright Lights