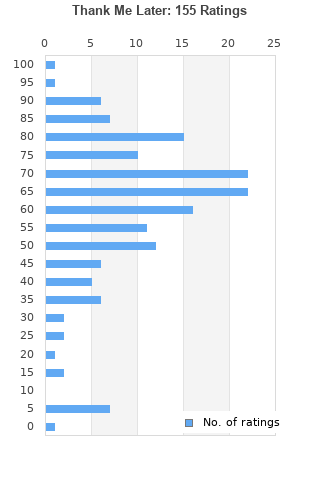 ID6244z - Drake - Thank Me Later - 602527433073 - CD - europe
Condition: Very Good
Time left: 1d 9h 25m 57s
Ships to: Worldwide
£7.40
Go to store
Product prices and availability are accurate as of the date indicated and are subject to change. Any price and availability information displayed on the linked website at the time of purchase will apply to the purchase of this product.  See full search results on eBay

Thank Me Later is ranked 5th best out of 12 albums by Drake on BestEverAlbums.com.

The best album by Drake is Take Care which is ranked number 786 in the list of all-time albums with a total rank score of 2,416. 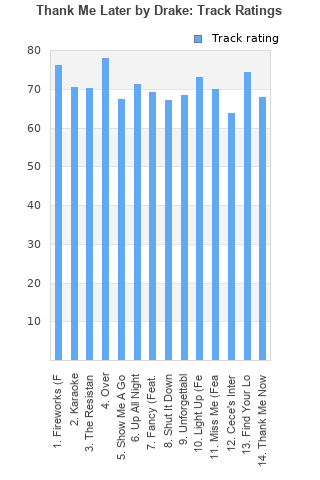 Rating metrics: Outliers can be removed when calculating a mean average to dampen the effects of ratings outside the normal distribution. This figure is provided as the trimmed mean. A high standard deviation can be legitimate, but can sometimes indicate 'gaming' is occurring. Consider a simplified example* of an item receiving ratings of 100, 50, & 0. The mean average rating would be 50. However, ratings of 55, 50 & 45 could also result in the same average. The second average might be more trusted because there is more consensus around a particular rating (a lower deviation).
(*In practice, some albums can have several thousand ratings)
This album has a Bayesian average rating of 63.3/100, a mean average of 62.1/100, and a trimmed mean (excluding outliers) of 62.6/100. The standard deviation for this album is 20.6.

@corenfro: Other than that it is rap-singing like 808s, the only one that is really derivative is the song he did with Kanye.

"wannabe gangster" implying real gangsters exist and it's not just all boasting (2pac did ballet in his teens).

"abysmal" haha (just the fact that you use that word)

It has a nostalgic feel to it, but all that is probably idiosyncratic. It was a rushed project.

So derivative of Kanye's 808's and heartbreaks. When you start a career being derivative of Kanye's worse album that's sad. Some of the music here isn't terrible, but then the listener is hit with some trite overused wannabe gangster cliche lyrics. Drake drops a few bars here and there that are clever but on the whole I feel like the maturity of these lyrics are pretty abysmal.

Not really his own yet... it's a young kid finding his sound, but relying too much on the cliched themes of fame, money and women.

It's still his weakest album, but I'd give it much more than a 74.

I know its a generalization, but why is it that all freshman albums by rappers end up being very amateur and unoriginal? Good album, not terrible, but certainly not worth several replays. It has its moments, but as a whole, it doesn't do justice like his second and third album.

It's one of the most beautifully human albums ever made

Your feedback for Thank Me Later