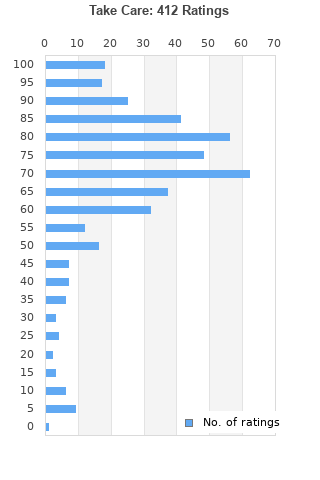 Take Care is ranked as the best album by Drake. 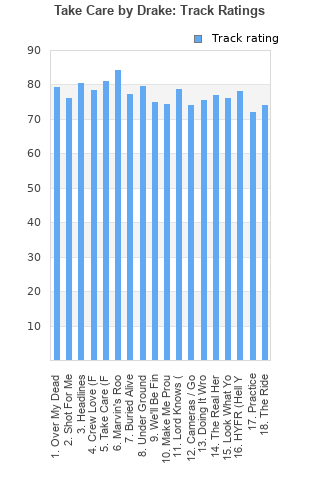 Rating metrics: Outliers can be removed when calculating a mean average to dampen the effects of ratings outside the normal distribution. This figure is provided as the trimmed mean. A high standard deviation can be legitimate, but can sometimes indicate 'gaming' is occurring. Consider a simplified example* of an item receiving ratings of 100, 50, & 0. The mean average rating would be 50. However, ratings of 55, 50 & 45 could also result in the same average. The second average might be more trusted because there is more consensus around a particular rating (a lower deviation).
(*In practice, some albums can have several thousand ratings)
This album has a Bayesian average rating of 70.8/100, a mean average of 69.1/100, and a trimmed mean (excluding outliers) of 70.7/100. The standard deviation for this album is 20.7.

Mostly entertaining, but, as is common in highly regarded hip-hop albums, entirely too long.

Cups of the rose

not terrible, not great... but his best imo

I still feel it every time I listen this. Apart from all the cringy copycats his influence is a little bit everywhere, its normalcy has made it invisible. Your success as a rapper/R&B singer in the '10s was dictated by how good you could hide the fact you were ultimately inspired by Drake. Melodic rapping, it's a simple formula but it just works. He functioned as the bridge between '00s hip hop of Kanye and Lil Wayne and '10s hip hop of Chance, The Weeknd and Frank Ocean (the last two of which get more recognition solely because they use more pretentious and safe-for-rock-critics samples). And while I don't think Drake's style is too obvious in those artists, I believe he made it possible for them to exist. Some things are just not a coincidence.

I'm glad he made this album because otherwise I don't think anyone would've recognized his influence. Like he says on another album: "it's not about who did first but about who did it right". On the other hand with less hits in his pocket a lot of critics would've been much easier to praise him.

Decent album from Drizzy, who mixes rap with sing more hit than miss.

A decided step up from his debut, more musically interesting, some good songwriting here and there and lyrics, while still shitty, aren't *AS* shitty as on his debut. His rapping is nothing to write home about, slightly improved. Drake can write a song, he's still just so darn inconsistent and his later albums don't change that fact.

Patience is the reason Frank Ocean is praised and Drake is shat upon. That said Drake is 10x as commercially successful as all the artists in this genre this decade.

took me too long to recognize

Your feedback for Take Care