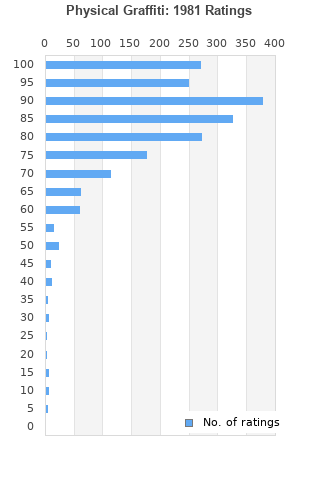 Physical Graffiti is ranked 5th best out of 22 albums by Led Zeppelin on BestEverAlbums.com.

The best album by Led Zeppelin is Untitled (Led Zeppelin IV) which is ranked number 11 in the list of all-time albums with a total rank score of 52,657. 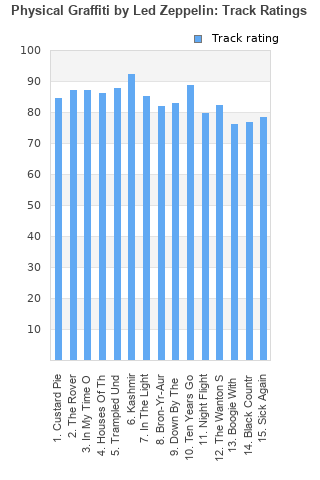 Rating metrics: Outliers can be removed when calculating a mean average to dampen the effects of ratings outside the normal distribution. This figure is provided as the trimmed mean. A high standard deviation can be legitimate, but can sometimes indicate 'gaming' is occurring. Consider a simplified example* of an item receiving ratings of 100, 50, & 0. The mean average rating would be 50. However, ratings of 55, 50 & 45 could also result in the same average. The second average might be more trusted because there is more consensus around a particular rating (a lower deviation).
(*In practice, some albums can have several thousand ratings)
This album is rated in the top 1% of all albums on BestEverAlbums.com. This album has a Bayesian average rating of 84.5/100, a mean average of 83.5/100, and a trimmed mean (excluding outliers) of 84.6/100. The standard deviation for this album is 14.0.

This album is very near to perfection Led Zeppelin achieved on their fourth album and this one is deginitely their most ambitious one. Custard Pie is very strong opener which transitions into even better The Rover - one of the most memorable songs. In My Time Of Dying is a giant beautiful song, Houses Of The Holy great too, but what they did on Trampled Under Foot and Kashmir is unbelievable. In The Light and Bron-Yr-Aur is a nice break and then comes Down By The Seaside with extremely beach vibe to its melody. Ten Years Gone is just gorgeous and the rest of the album is OK to me. The only song I dislike is Black Sountry Woman and maybe the album is too long and hard to digest to fully appreciate it at the first listen.

I like to think of this as the "fans' album," because it's a very personal album. There are hardly any radio-friendly tracks, (unlike Zoso), which I love. The first three sides are just so brilliant. I don't even mind side 4, because it works in the context with the rest of the album. It's the most unique of the Zeppelin albums. If you're looking for something besides huge radio hits, this is worth listening to.

fave tracks - Kashmir, Trampled Under Foot, Houses of the Holy

A little bit too long, could do with cutting 5 of the weakest songs out and I would rate it higher. But there's some great stuff on here - my highlights are Kashmir (obviously), The Rover (my personal favourite) and Down By The Seaside.

This is a great album and the amount of songs is overwhelming to grab in one sitting. But it is clearly a frontloaded album with the best songs on LP sides 1-3. The last five are sound very much songs that were left over, In Zep rating, they are not so good, but for many other bands, they would have been great songs.
I can't help noticing that a couple of songs have riffs that are very close to each other: Custard Pie vs Wanton Song/Trampled under.. Sonically they are pretty damn close to HOH songs. But that is not surprising.
Zeppelin copies his own songs :)

This is LZ's strangest album from a structure standpoint. They clearly knew what the hits would be, and stacked them together in the belly of the record. On the other hand, the ending just gets a piece weaker with every track. Totally worth the listen for the gems.

Physical Grafffiti has amazing highs. Kashmir, In My Time of Dying, Trampled Under Foot and Custard Pie are among my favorite Zeppelin tracks. Unfortunately the album's weakest tracks tend to be all thrown in at the end. Side D of the double album doesn't rival the other 3. Some people will argue this is one of their best, and it is really good, but to me it isn't at the ridiculously high level the first 5 records were on. That said I'll continue to listen, its still a rock solid album.

Your feedback for Physical Graffiti