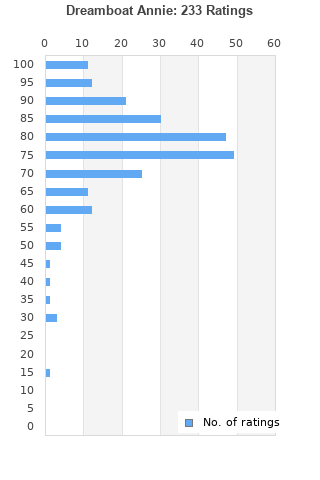 Heart vinyl LP album record Dreamboat Annie UK ARTY139 ARISTA 1976
Condition: Used
Time left: 5h 50m 8s
Ships to: Worldwide
£27.70
Go to store
Product prices and availability are accurate as of the date indicated and are subject to change. Any price and availability information displayed on the linked website at the time of purchase will apply to the purchase of this product.  See full search results on eBay

Dreamboat Annie is ranked as the best album by Heart. 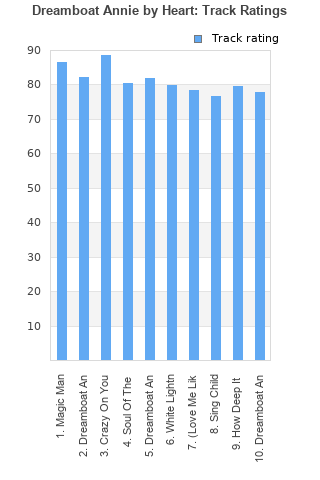 Rating metrics: Outliers can be removed when calculating a mean average to dampen the effects of ratings outside the normal distribution. This figure is provided as the trimmed mean. A high standard deviation can be legitimate, but can sometimes indicate 'gaming' is occurring. Consider a simplified example* of an item receiving ratings of 100, 50, & 0. The mean average rating would be 50. However, ratings of 55, 50 & 45 could also result in the same average. The second average might be more trusted because there is more consensus around a particular rating (a lower deviation).
(*In practice, some albums can have several thousand ratings)
This album is rated in the top 4% of all albums on BestEverAlbums.com. This album has a Bayesian average rating of 77.9/100, a mean average of 77.0/100, and a trimmed mean (excluding outliers) of 78.1/100. The standard deviation for this album is 13.6.

Dreamboat Annie is one of the strongest debut albums in the 70s. Very unusual at a time when disco was becoming popular and hard rock was literally an all-male thing. But what really made this album unusual was the mixing of heavy rock with sweet, orchestral ballads. The album truly sounds like a combination of The Carpenters and Black Sabbath, a combination that sounds truly awful but isn't. The heavier material like Crazy on You and Magic Man got all the attention, but the quieter songs like How Deep it Goes, Love Me Like Music (I'll Be Your Song), and the title cut are just as important to the overall vibe of the album. There is much talk about this band being a Zeppelin copy, but the Zeppelin sound didn't come along until Little Queen. This album is very unique and not a ripoff or copy of anything. Although it gets labeled as hard rock, I remember listening to this album and being really confused as to what kind of band Heart actually was because it's equally good on the Carpenters-type stuff and the heavier, darker material.

Fantastic album which has some surprises in store if you've only ever listened to The the 1980's albums like 'Heart' and 'Bad Animals'. Flute, a la Jethro Tull style coupled with Wakeham style Moog soloing add to the mix, coupled with superb vocals through the whole album. I should have bought this years ago!

Heart came out with this kickass debut and put the world on notice they were going to keep rock alive in the mid seventies and the disco era.

A great debut album from the Wilson sisters contains so many great songs the only track that I give less than 80/100 is Sing Child. Overall great album which would be higher if the dozen or so members who have it in their 1976 charts would change it to 1975 !.

Incredibly underrated on this site. It isn't perfect, but it's beautiful, thoughtful, and incredibly well sculpted and written. Side one is nearly flawless and there are some great deep tracks on side two. It's damn good.

I cant decide which record is better, dreamboat Annie, or little queen, so I will put them as even. A quintessential female rock record.

Love the album, what else is there to say about it?!!

Best Track: Crazy On You

Your feedback for Dreamboat Annie