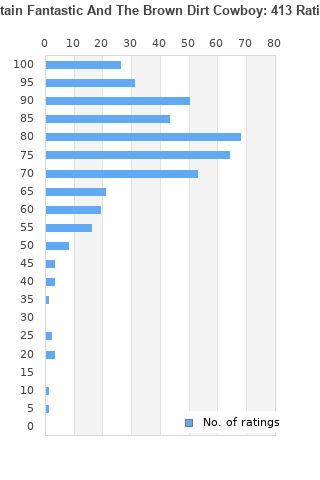 ELTON JOHN - Captain Fantastic And Brown Dirt Cowboy - CD - *Mint Condition*
Condition: Like New
Time left: 10h 8m 54s
Ships to: Worldwide
$19.95
Go to store
Product prices and availability are accurate as of the date indicated and are subject to change. Any price and availability information displayed on the linked website at the time of purchase will apply to the purchase of this product.  See full search results on eBay

Captain Fantastic And The Brown Dirt Cowboy is ranked 2nd best out of 47 albums by Elton John on BestEverAlbums.com.

The best album by Elton John is Goodbye Yellow Brick Road which is ranked number 237 in the list of all-time albums with a total rank score of 8,477.

Listen to Captain Fantastic And The Brown Dirt Cowboy on YouTube 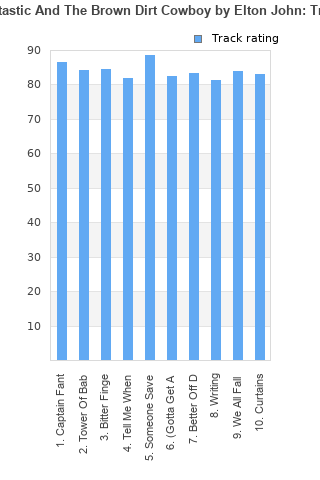 Rating metrics: Outliers can be removed when calculating a mean average to dampen the effects of ratings outside the normal distribution. This figure is provided as the trimmed mean. A high standard deviation can be legitimate, but can sometimes indicate 'gaming' is occurring. Consider a simplified example* of an item receiving ratings of 100, 50, & 0. The mean average rating would be 50. However, ratings of 55, 50 & 45 could also result in the same average. The second average might be more trusted because there is more consensus around a particular rating (a lower deviation).
(*In practice, some albums can have several thousand ratings)
This album is rated in the top 4% of all albums on BestEverAlbums.com. This album has a Bayesian average rating of 77.8/100, a mean average of 76.9/100, and a trimmed mean (excluding outliers) of 78.0/100. The standard deviation for this album is 15.3.

I'll never forget listening to this album while waiting in line to get tickets for Elton's 1975 Tour Shows in Oakland. They sold out just before I get to the door, but luckily a high school friend got two! Amazing show with Elton at his peak. This album along with Physical Graffiti, Wish You Were Here, One of These Nights and Venus & Mars (Wings) take me right back to my Junior Year of High School here in S.F.

Captain Fantastic and the Brown Dirty Cowboy has a cool concept. The songs on the album aren't really to be consumed on their own, Only as part of the story. With the exception of Someone Saved My Life Tonight and possibly the title track. I also like the first half a bit more than the second. I'd probably rank at least 3 Elton John albums higher than this one.

Key tracks: Captain Fantastic and the Brown Dirt Cowboy, Someone Saved My Life Tonight, Bitter Fingers and Tower of Babel.

Mayhaps I only think so highly of this album because of nostalgia. Regardless, I think this is Elton's best, im in love with that title track. But also nearly every other song is jammy and catchy too. yeah this all might just be nostalgic drivel. Oh well, it's all the same to me, I love it.

Contains some great ballads. Someone Saved My Life Tonight is perhaps the best example. Bitter fingers and Better Off Dead are musically more upbeat and the album as a whole is enjoyable. It is my favourite Elton John album.

An autobiographical album telling the story of the early days of the Elton/Bernie partnership. The tracks cover their meeting (the title track), writing to order for other artists (Bitter Fingers) Elton's suicide attempt (Someone Saved My Life Tonight) and various other aspects of their respective experiences/partnership.

Update: definitely works as a whole. Ziggy Stardust grows up.

I don't quite get what people see in this album as a whole, but the last two tracks here are John's height as a balladeer, and "Tell Me When the Whistle Blows" is deliciously dark (even Floyd-ish)

A concept album this time. Captain fantastic, only really works as a whole. Individually the songs probably wouldn't work as well on their own, except on the beautiful ballad, someone saved my life tonight. There's nothing bad here, far from it, it's just that to get the most out of the songs they needed to be listened to in one sitting.

I've never been a huge fan of Captn Fantastic. While a huge bounce back from Caribou, it simply doesn't have the high points that mark the "Tumbleweed Connection" through "Goodbye Yellow Brick Road" albums. It has grown on me over the years, but ranks (IMHO) below all of those.

Rolling Stone ranked this #158 on their Top 500 Albums list

Your feedback for Captain Fantastic And The Brown Dirt Cowboy