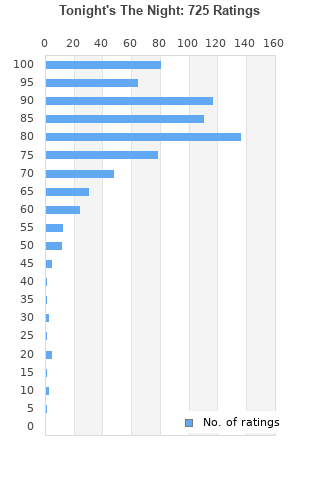 Tonight's The Night is ranked 4th best out of 81 albums by Neil Young on BestEverAlbums.com.

The best album by Neil Young is After The Gold Rush which is ranked number 78 in the list of all-time albums with a total rank score of 18,315. 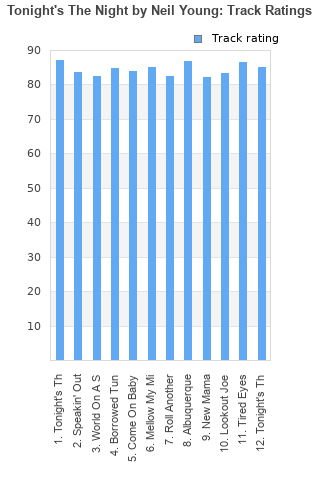 Rating metrics: Outliers can be removed when calculating a mean average to dampen the effects of ratings outside the normal distribution. This figure is provided as the trimmed mean. A high standard deviation can be legitimate, but can sometimes indicate 'gaming' is occurring. Consider a simplified example* of an item receiving ratings of 100, 50, & 0. The mean average rating would be 50. However, ratings of 55, 50 & 45 could also result in the same average. The second average might be more trusted because there is more consensus around a particular rating (a lower deviation).
(*In practice, some albums can have several thousand ratings)
This album is rated in the top 1% of all albums on BestEverAlbums.com. This album has a Bayesian average rating of 82.4/100, a mean average of 81.6/100, and a trimmed mean (excluding outliers) of 82.5/100. The standard deviation for this album is 14.2.

It's good but not the greatest Neil record I can think about, the highlights for me are Speakin' Out and Albuquerque and if all album sounded like that it would be great, but unfortunately there are songs like World On A String or Mellow My Mind where I just can't stand the vocals.

a lilting guitar the vocals, the harmonica, and deeply personal Its Neil

Some great, great songs here, but overall not amongst my favorite Neil Young releases.

It took me a while to get through this one, but it is really good. The themes are dense and sad. Most of the songs focus on death, as Neil Young had just experienced two in his life at the time of recording this album, both heroin overdoses. But there's lots of good material here, both versions of the title track, Tired Eyes, Borrowed Tune, Come On Baby Let's Go Downtown (which features Danny Whitten, one of the casualties of heroin previously mentioned), and Speakin' Out (Nils Lofgren's guitar work on Speakin' Out is great). You can tell the deaths of Danny Whitten and Bruce Berry really took a toll on him for a while. Tonight's the Night is a must listen for Neil Young fans.

I'm a huge Neil fan, but I could never fully get into this one. It always sounded unfinished compared to his other albums from this era. Many of the songs are somewhat sparse and quietly mixed. I assume this was because he was going to release Homegrown the year this came out, but decided to rush this one out instead.

I still think the songwriting is superb, and that there are some great emotional moments on this album ("Borrowed Tune" and "Tired Eyes" are quite beautiful). Also, the lyrics and messages are amazing. As an anti-drug album, it's great.

Neil Young with another really good album. I liked this more than the previous album, On the Beach.

Good lyrics but not the best music, good album by Mr Young

Your feedback for Tonight's The Night