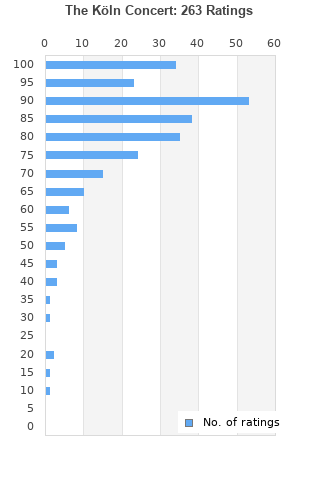 The Köln Concert is ranked as the best album by Keith Jarrett. 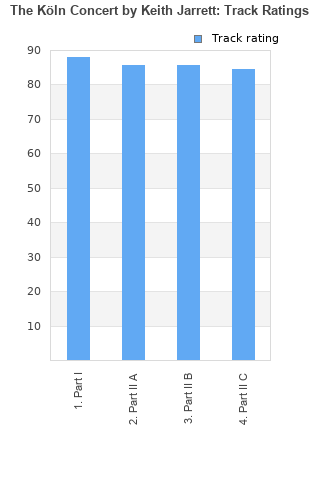 Rating metrics: Outliers can be removed when calculating a mean average to dampen the effects of ratings outside the normal distribution. This figure is provided as the trimmed mean. A high standard deviation can be legitimate, but can sometimes indicate 'gaming' is occurring. Consider a simplified example* of an item receiving ratings of 100, 50, & 0. The mean average rating would be 50. However, ratings of 55, 50 & 45 could also result in the same average. The second average might be more trusted because there is more consensus around a particular rating (a lower deviation).
(*In practice, some albums can have several thousand ratings)
This album is rated in the top 1% of all albums on BestEverAlbums.com. This album has a Bayesian average rating of 82.2/100, a mean average of 81.5/100, and a trimmed mean (excluding outliers) of 82.6/100. The standard deviation for this album is 16.0.

The improvisation on here is fantastic and so is the piano playing but I think this is more for the background than for deep inspection. When the only thing you are focusing on is this it really does drag and the music feels needlessly elongated. It does get quite repetitive and boring by the time you reach the conclusion as it is tough to tell most of it apart. Nothing really stunned me either and there was no point in the listen where I had to sit back and just admire how phenomenal it is. With that being said his playing is fantastic and he creates a brilliant atmosphere that is perfect for listening to when you are working or need to concentrate on something else. Overall, this record creates a fantastic environment but there is only so much you can look into on this record and it does get boring for me.

I’ve found this album to be an enjoyable listen for both background music and more intense, nearly meditative listening.

It’s a beautiful and fun performance with a backstory nearly as good.

this might be the greatest improvised performance of all time.

It's maybe the only album of Keith Jarrett that you can enjoy completely from the beginning to the end. A masterpiece

my first foray into the world of the piano solo. What an introduction !!

Well who couldn't be pleased by the show! They play the piano all the way through. Got to keep them seated and happy. I had a good time.

Your feedback for The Köln Concert