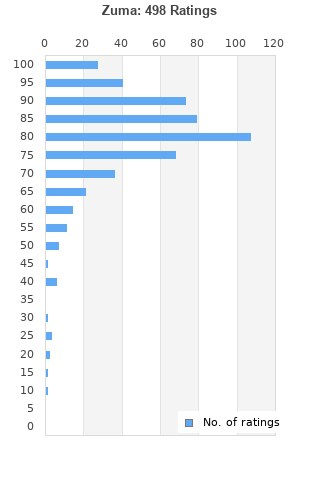 Zuma is ranked 3rd best out of 24 albums by Neil Young & Crazy Horse on BestEverAlbums.com.

The best album by Neil Young & Crazy Horse is Everybody Knows This Is Nowhere which is ranked number 212 in the list of all-time albums with a total rank score of 8,416. 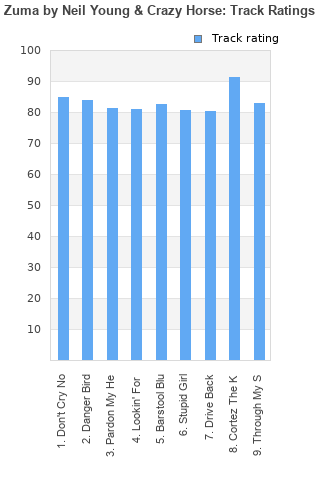 Rating metrics: Outliers can be removed when calculating a mean average to dampen the effects of ratings outside the normal distribution. This figure is provided as the trimmed mean. A high standard deviation can be legitimate, but can sometimes indicate 'gaming' is occurring. Consider a simplified example* of an item receiving ratings of 100, 50, & 0. The mean average rating would be 50. However, ratings of 55, 50 & 45 could also result in the same average. The second average might be more trusted because there is more consensus around a particular rating (a lower deviation).
(*In practice, some albums can have several thousand ratings)
This album is rated in the top 1% of all albums on BestEverAlbums.com. This album has a Bayesian average rating of 80.4/100, a mean average of 79.6/100, and a trimmed mean (excluding outliers) of 80.6/100. The standard deviation for this album is 14.0.

Very Good Neil...This is an album worth of any collection.

Cortez the Killer is a true highlight in Young's career; it's a gorgeous track. But its image of Moctezuma II/Montezuma is so completely untrue, it really bothers me, more each time I go back and listen. Of course, it doesn't matter, it's a simplified portrayal to make a point, and who cares anyway, it's just a song. I would say simplified doesn't have to be monstrously exaggerated, but I get that basic attitude.

But I'm sorry, while it's obviously true enough to say "What a killer" about the detestable Cortez and his gang of thugs, to say "Hate was just a legend/War was never known" about Montezuma and the Aztecs is just insane, and I can't stand it. Great song, deplorable lyric. We're all supposed to ignore it, I know, but it's like the emperor and his clothes, at some point some childish person should point out that Neil Young should maybe read a f'ing book before writing songs about things that are written down in books. Montezuma had "the secrets of the world"? No he f'ing did not.

You take an artist with his flaws. I've been listening to ol' Neil for a long, long time; I basically learned guitar from two Neil Young songbooks I shoplifted from a bookstore when I was 13. There are only a couple of these major howlers (Dylan's got dozens) in his career, and it's been a long career. So, it's all good, but still.

This one from Neil Young is a kind of mixed bag, it has some incredible highlights (Cortez The Killer, Don't Cry No Tears) but it also has some mediocre ones (Stupid Girl, Pardon My Heart) .

One of Neil's best Crazy Horse records, and one of his best albums period. Cortez the Killer may be an obvious standout on the album and in his catalogue, but the rest of the album is a consistently solid work. Zuma is probably lost in the shuffle a bit since it came out so close to so many other great records.

Zuma is a lot better than I was led on to believe. I enjoyed this album a lot. It's a lot less bleak than Tonight's the Night or On the Beach, but that doesn't mean it has nothing to offer. Every song is, at the very least, enjoyable, and the better songs are pretty memorable Neil Young songs (Cortez the Killer, Barstool Blues, Pardon My Heart). Not his best of the 70s, but not his worst.

This is the most underrated Album in music History. Not Goldrush, not Harvest, THIS is Neil Youngs best creation. With Cortez the Killer being one of the best songs ever written.

Your feedback for Zuma