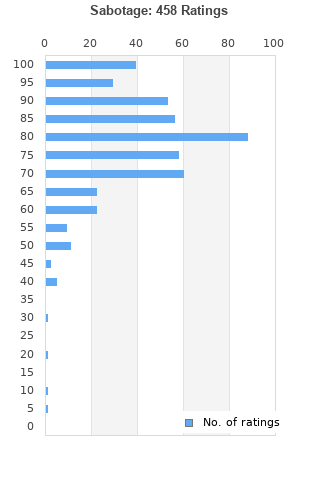 Sabotage is ranked 7th best out of 43 albums by Black Sabbath on BestEverAlbums.com.

The best album by Black Sabbath is Paranoid which is ranked number 55 in the list of all-time albums with a total rank score of 21,460. 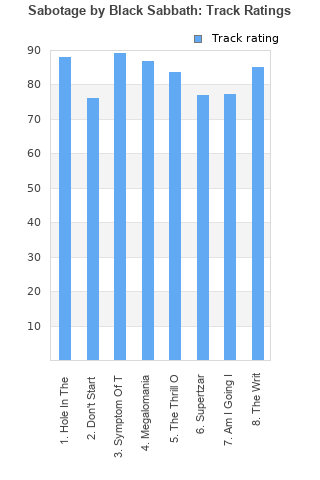 Symptom Of The Universe
Rating: 89 (124 votes)Comments:

Rating metrics: Outliers can be removed when calculating a mean average to dampen the effects of ratings outside the normal distribution. This figure is provided as the trimmed mean. A high standard deviation can be legitimate, but can sometimes indicate 'gaming' is occurring. Consider a simplified example* of an item receiving ratings of 100, 50, & 0. The mean average rating would be 50. However, ratings of 55, 50 & 45 could also result in the same average. The second average might be more trusted because there is more consensus around a particular rating (a lower deviation).
(*In practice, some albums can have several thousand ratings)
This album is rated in the top 2% of all albums on BestEverAlbums.com. This album has a Bayesian average rating of 78.7/100, a mean average of 78.3/100, and a trimmed mean (excluding outliers) of 78.9/100. The standard deviation for this album is 14.2.

I feel like this is really special record in Sabbath catalogue, none of the others have guitars playing as fast as on "Hole in The Sky" and "Megalomania" is great epic, but after it album becomes much worse. But highlights are so good it deserves high score, pretty underrated album.

Sabotage has some phenomenal highlights such as Megalomania which is a 9 minute epic and a song that is impossible not to love. However, some songs do not remain at this standard and so the album doesn't remain consistent throughout. This means that whilst this album is amongst their greatest, it isn't right at the top for them.

I had forgotten what a really good album this is, not as good as their first few albums but nearly. The album rocks very hard and has a very sinister atmosphere which serves the Black Sabbath sound very well. Especially Symptom Of The Universe and the long Megalomania are top BS.

Great album and last in a near perfect run of 6 albums. This one feels like it foreshadows 80s metal, with the first 5 tracks being the highlight- my personal favorite being the last 6 minutes of Megalomania, which is just a metal classic. The last 3 tracks on the album are somewhat weaker. Supertzar is pure filler. Am I Going Insane has an impressive arrangement but if you aren't careful the melody will indeed make you go insane. The Writ- well, on paper it's as good as the first 5, with a great riff at the end, I think I just don't love that it's another whiny song about contract negotiations.

For some reason I listened to the first 5 albums and never this one- that was a mistake.

The band is still in good shape on this record, but the cracks are showing

The original sleeve design was intended to show the idea of sabotage but had become sabotaged itself when the shoot was rushed, the intended images were supposed to be superimposed on later. By the time the band saw it, it was too late to change. Ho hum.

Most probably the heaviest Sabbath album out there, serving up a plethora of quality tracks. 'Hole In The Sky', 'Megalomania', 'Sympton Of The Universe' and 'Am I Going Insane' being top of the tree in both riffery and vocal delivery. Sadly, I think the cover art is crap and I really wish they had come up with something more sinnister which linked to the album title. As a vinyl collector the cover art is an equally important part of the whole experience. I can't get my head around why a member of one of the heaviest rock bands in the world at the time would want to be seen on the front cover of an album wearing red Long Johns, or am I missing something?

Angry, soaring, and epic from start to finish. Probably my favorite Sabbath album

For me this is Sabbath's best album, but only just, there are so many contenders. Number 11 in my 100 greatest albums from my top group.

Really underrated album. Not many angry albums like this out there. Megalomania is unbelievable.

Your feedback for Sabotage