Blood On The Tracks (studio album) by Bob Dylan 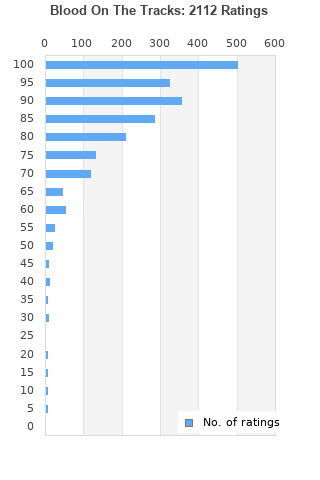 Blood On The Tracks is ranked 3rd best out of 74 albums by Bob Dylan on BestEverAlbums.com.

The best album by Bob Dylan is Highway 61 Revisited which is ranked number 26 in the list of all-time albums with a total rank score of 36,369. 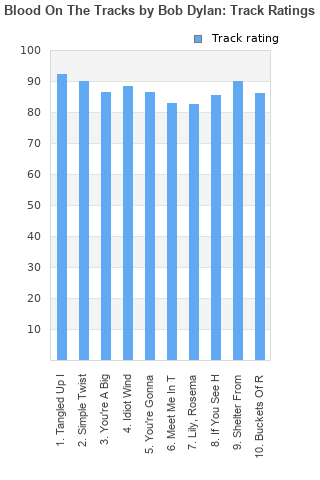 Shelter From The Storm
Rating: 90 (491 votes)Comments:

Blood On The Tracks rankings

Blood On The Tracks collection

Blood On The Tracks ratings

Rating metrics: Outliers can be removed when calculating a mean average to dampen the effects of ratings outside the normal distribution. This figure is provided as the trimmed mean. A high standard deviation can be legitimate, but can sometimes indicate 'gaming' is occurring. Consider a simplified example* of an item receiving ratings of 100, 50, & 0. The mean average rating would be 50. However, ratings of 55, 50 & 45 could also result in the same average. The second average might be more trusted because there is more consensus around a particular rating (a lower deviation).
(*In practice, some albums can have several thousand ratings)
This album is rated in the top 1% of all albums on BestEverAlbums.com. This album has a Bayesian average rating of 87.0/100, a mean average of 85.8/100, and a trimmed mean (excluding outliers) of 87.1/100. The standard deviation for this album is 15.1.

Blood On The Tracks favourites

Blood On The Tracks comments

To come back in this way truly shows Dylan to be the musical cat with nine lives. This is my personal favourite in a glittering career. The emotion shown here is so honest, so believable and passionately raw. Going back to making acoustic guitar based stories brings back memories of his humble beginnings and in many ways by being that bit older and wiser he creates the best version of this type of Dylan record.

Sad and beautiful Bob Dylan's album, I kinda prefer his earlier work like Bringing It All Back Home, Highway 61 Revisited and Blonde On Blonde, but this is one is different and shows Bob's diversity. Highlights for me are Tangled Up In Blue, Idiot Wind and Shelter From The Storm, but there are no bad tracks on here.

Obviously Tangled Up in Blue gets the accolades, but Shelter From the Storm is a top 10 Dylan track as well.

I love Bob Dylan. I love the atmosphere he creates in his songs. He has wonderful albums and this is his best in IMHO. I could listen to this album all day long. Tangled Up in Blue is an all timer as well.

Probably my favorite Dylan album. It feels like his most personal work, and his lyrics, vocals and guitar work are all as good as they ever were in his career. Not an album that I can listen to too often without putting myself in a bad mood (it's a pretty glum record), but there are some serious career standouts here that I listen to frequently, including Tangled Up in Blue, Simple Twist of Fate and Shelter from the Storm. Obviously a must-listen for fans of folk and Bob Dylan, and highly recommended for all music enjoyers.

Easily the best of Dylan’s catalogue. At this point in his career, he had been through a lot of troubles personally and professionally. He puts his best skills into this album and takes a step forward in his sound. At the same this album is a callback to his earlier days in which he only used his voice and a guitar to produce a good song. Compared to a lot of his 70’s work, this album is stripped back and simple. Undeniable a masterpiece.

Your feedback for Blood On The Tracks