The Basement Tapes (studio album) by Bob Dylan & The Band 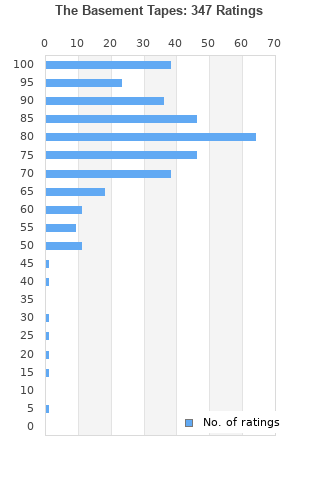 The Basement Tapes is ranked as the best album by Bob Dylan & The Band. 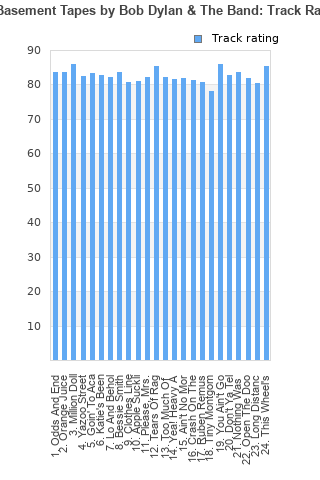 Rating metrics: Outliers can be removed when calculating a mean average to dampen the effects of ratings outside the normal distribution. This figure is provided as the trimmed mean. A high standard deviation can be legitimate, but can sometimes indicate 'gaming' is occurring. Consider a simplified example* of an item receiving ratings of 100, 50, & 0. The mean average rating would be 50. However, ratings of 55, 50 & 45 could also result in the same average. The second average might be more trusted because there is more consensus around a particular rating (a lower deviation).
(*In practice, some albums can have several thousand ratings)
This album is rated in the top 2% of all albums on BestEverAlbums.com. This album has a Bayesian average rating of 79.8/100, a mean average of 79.3/100, and a trimmed mean (excluding outliers) of 80.0/100. The standard deviation for this album is 14.3.

Some really great songs, but there a couple duds. Not many, though. If you like Dylan and/or The Band, this is a must listen.

Hard to deny some of my favorite musicians writing songs together, but this is miles removed from the peak output of anyone involved.

Basically a collection of songs from the 'missing' era. Some better than others, but much more along the lines of what The Band produced on The Big Pink. If you like them, you'll like this.
I don't particularly.

Younger people say, "The bootleg series is the proper version." Older people say, "Oh it was all on bootleg, anyway, everybody had already heard it."

Not if you were 14 when this came out on LP, and didn't know what a bootleg was. This was like finding some sort of occult text from another world. I used to pour over every second of this version, trying to figure out exactly what it all meant, making up my own meanings, playing along on my acoustic. This is the version that brought Dylan to the teens of the 70s, along with Blood on the Tracks and Desire.

It's like the Memphis Jug Band came back to life in the late 60s. What an album.

Amazing collaboration between 2 of my favorites artists.

This album has almost become obsolete with the release of the bootleg series version. Still, it's a good album in it's own right, but as it says on the tin, it's Bob Dylan and the band, not just Bob. About a third of the album features just the Band, the rest with Dylan. Million dollar bash, is nonsensical, but wonderful, and, clothes line saga, and, please Mrs. Henry are enjoyable. It is a fun album with The Band's, long distance operator, also fine. One of the best songs from the sessions was, sign on the cross, which we can now hear thanks to the bootleg series. Good stuff.

Your feedback for The Basement Tapes