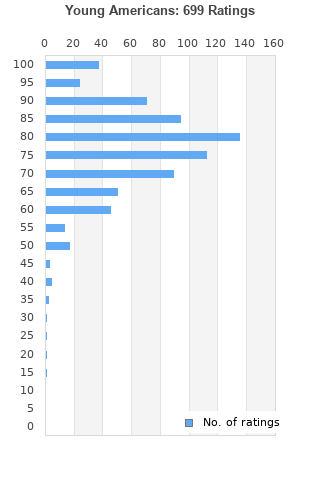 Young Americans is ranked 13th best out of 88 albums by David Bowie on BestEverAlbums.com.

The best album by David Bowie is The Rise And Fall Of Ziggy Stardust And The Spiders From Mars which is ranked number 9 in the list of all-time albums with a total rank score of 57,024. 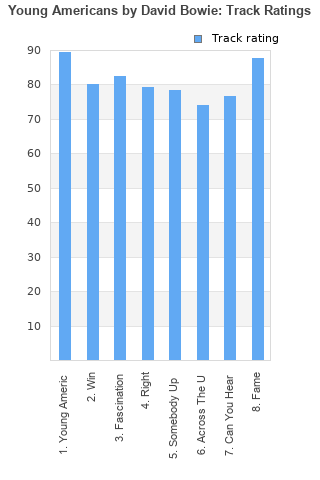 Rating metrics: Outliers can be removed when calculating a mean average to dampen the effects of ratings outside the normal distribution. This figure is provided as the trimmed mean. A high standard deviation can be legitimate, but can sometimes indicate 'gaming' is occurring. Consider a simplified example* of an item receiving ratings of 100, 50, & 0. The mean average rating would be 50. However, ratings of 55, 50 & 45 could also result in the same average. The second average might be more trusted because there is more consensus around a particular rating (a lower deviation).
(*In practice, some albums can have several thousand ratings)
This album is rated in the top 4% of all albums on BestEverAlbums.com. This album has a Bayesian average rating of 77.3/100, a mean average of 76.9/100, and a trimmed mean (excluding outliers) of 77.3/100. The standard deviation for this album is 12.7.

Solid record but not my favorite from Bowie

This is such a rollercoaster ride of an album with it having some extremely high highs and some really low lows. The bookends of this record is where it shines with Bowie at his best on Young Americans and Fame. Both songs are simply sensational and they open and close the record perfectly. Instrumentally they are phenomenal and Bowie's vocal performance on both tracks is brilliant. Everything in between these two songs is a bit of mess. You can see the style that they are trying to go for but it just sounds so watered down and falls flat for me. Everything just seems to be inconsistent in the middle of this record. Even the vocal performance can be a bit shaky on tracks such as Across The Universe but then you get greatness scattered amongst them such as the sax work on Can You Hear Me which gives a much needed vibrant edge to an all round dull and boring song. Overall, this is such a confused and messy record that is saved from being a poor album by those random flourishes of greatness and by the starting and closing track being phenomenal.

The cover of Across the Universe is bad, but the rest is ok. Title track and Fame are catchy

Not the greatest Bowie album at some places really bad, the cover of "Across The Universe" is terrible. However "Fame" is great track and "Fascination" is really good. Title track mediocre for me.

I really don't like it. squeaky sax methodical pacing rock

The three stars are for Fame (written with Lennon). The rest is awful. Young Americans sounds like what it is fake white soul music. And then there's Across the Universe! Never has a Beatles' song of such greatness been reduced to such terrible treatment. Guess the coke was skewering Bowie's judgement.

Bowie’s “plastic soul” album not his best but impossible to ignore with the classic tracks Young Americans and Fame. I would also recommend Win and Fascination.

Okay, says the stick thin Bowie, time for a soul album. And as the cultural magpie always does, he achieves it with aplomb. Check out Right along the better known singles. Great stuff, with a young Luther Vandross adding his vocals and influence

Your feedback for Young Americans