The Hissing Of Summer Lawns (studio album) by Joni Mitchell 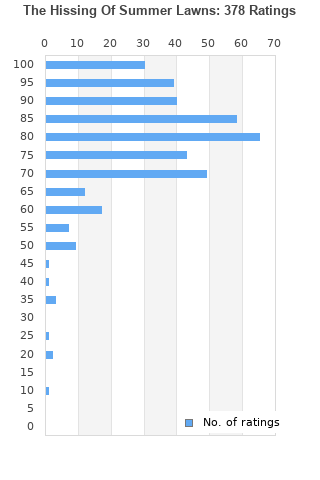 JONI MITCHELL The Hissing Of Summer Lawns LP vinyl record 1986 Emboss gatefold
Condition: Used
Time left: 15h 26m 2s
Ships to: Worldwide
£14.98
Go to store
Product prices and availability are accurate as of the date indicated and are subject to change. Any price and availability information displayed on the linked website at the time of purchase will apply to the purchase of this product.  See full search results on eBay

The Hissing Of Summer Lawns is ranked 4th best out of 29 albums by Joni Mitchell on BestEverAlbums.com.

The best album by Joni Mitchell is Blue which is ranked number 82 in the list of all-time albums with a total rank score of 19,070.

Listen to The Hissing Of Summer Lawns on YouTube 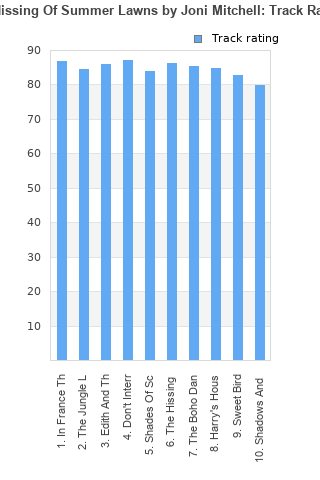 In France They Kiss On Main Street
Rating: 86 (63 votes)Comments:

The Hissing Of Summer Lawns rankings

The Hissing Of Summer Lawns collection

The Hissing Of Summer Lawns ratings

Rating metrics: Outliers can be removed when calculating a mean average to dampen the effects of ratings outside the normal distribution. This figure is provided as the trimmed mean. A high standard deviation can be legitimate, but can sometimes indicate 'gaming' is occurring. Consider a simplified example* of an item receiving ratings of 100, 50, & 0. The mean average rating would be 50. However, ratings of 55, 50 & 45 could also result in the same average. The second average might be more trusted because there is more consensus around a particular rating (a lower deviation).
(*In practice, some albums can have several thousand ratings)
This album is rated in the top 2% of all albums on BestEverAlbums.com. This album has a Bayesian average rating of 80.0/100, a mean average of 79.3/100, and a trimmed mean (excluding outliers) of 80.2/100. The standard deviation for this album is 14.3.

The Hissing Of Summer Lawns favourites

The Hissing Of Summer Lawns comments

First off Rolling Stone slagged a lot of great records. They hated Zeppelin. Then 20 years later they "revise" their original dismissals and admit everyone was right all along. On to Hissing, not quite as good as it's predecessor Court and Spark , it nevertheless continues Mitchell's musical evolution which would peak on Hejira. The first 4 tracks are the strongest but other highlights are the title track and the amusing Harry's House. One weakness Joni's voice gets on my nerves after awhile.

Joni at the end of her peak. The tracks that that stand out for me are "In France they Kiss on Main Street, Edith and the Kingpin & The Hissing of Summer Lawns.

One of the greatest jazz/pop albums ever recorded, and is right up there with some of the greatest jazz OR pop albums ever recorded. Stunning melodies, themes, lyrics and execution. To me this was the pinnacle of Joni's early work, despite how amazing are Court and Spark, Blue, For The Roses. I did not know Rolling Stone slagged this album when it was released, but they truly missed the boat in this instance. Pure grace and poetry, from her photograph to her artwork to the music itself, augmented by some outstanding musicians. Impeccable.

A great Joni Mitchell album continues the jazzy feel started on Court & Spark. The first 7 tracks are all 80-85/100. Its hard to single any track out as all are good but Shades of Scarlet Conquering & Edith and The Kingpin are especially remarkable.

It's absolutely incredible to think that this album was voted worst record of the year in rolling stone magazine. True, it's definitely an album that can go right by you on first listen, but repeated hearings brings out the beauty of the melodies in the songs. It's one of those LP's that just keeps getting better with each listen and features absolutely stunning songs in, don't interrupt the sorrow, Edith and the kingpin, and the excellent, the jungle line. Essential album from one of the greatest artist's of the seventies.

A concept album from Joni. It is like a music driven cubist painting of different aspects of the female psyche, maybe aspects of her own experience creep in. Anima rising indeed. Poetry in her lyrics and a refinement to Court and Spark.

First two songs are among Joni's best, but the rest of the album is more atmospheric, and feeling quite lost. In previous albums she was a stronger songwriter (and beautiful personality), in succeeding ones she sounds more confident in her ability to live and think independently. This is the soul-searching transition. I wouldn't consider it my favorite work of hers but I could see how it might appeal.

and what a transition from the hurtful Blue - this is sophisticated and jazzy in its very essence, whereas Blue was so vulnerable and naked in its soundstage. Sleek production

If this were the only Joni Mitchell album, it would be considered great. But, she has made several which are even better: Blue, Hejira, Court & Spark etc.

Your feedback for The Hissing Of Summer Lawns