A Night At The Opera (studio album) by Queen 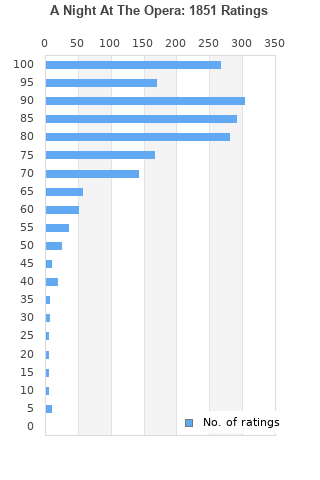 Queen A Night At The Opera Vinyl SEALED
Condition: New
$35.00

A Night At The Opera is ranked as the best album by Queen.

Funk Flex at The Queen
The Queen, Wilmington, United States.

Listen to A Night At The Opera on YouTube 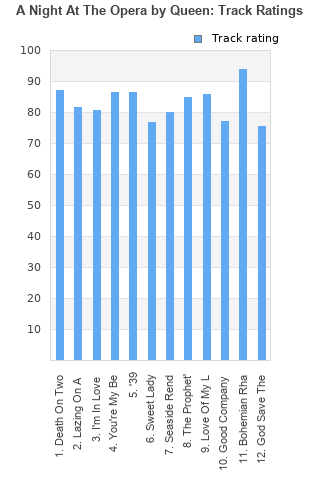 A Night At The Opera rankings

A Night At The Opera collection

A Night At The Opera ratings

Rating metrics: Outliers can be removed when calculating a mean average to dampen the effects of ratings outside the normal distribution. This figure is provided as the trimmed mean. A high standard deviation can be legitimate, but can sometimes indicate 'gaming' is occurring. Consider a simplified example* of an item receiving ratings of 100, 50, & 0. The mean average rating would be 50. However, ratings of 55, 50 & 45 could also result in the same average. The second average might be more trusted because there is more consensus around a particular rating (a lower deviation).
(*In practice, some albums can have several thousand ratings)
This album is rated in the top 1% of all albums on BestEverAlbums.com. This album has a Bayesian average rating of 82.9/100, a mean average of 81.7/100, and a trimmed mean (excluding outliers) of 83.0/100. The standard deviation for this album is 15.8.

A Night At The Opera favourites

A Night At The Opera comments

An influential and inspiring collection of much loved music.
The album is not without it's flaws but is undoubtedly one that will be cherished and listened to forever and undeniably Queen's greatest achievement.

Admittedly I used to feel as though Queen were a greatest hits band; even after trying this record. I was wrong of course, every track on the record is incredible and shows all of the best parts of the band at once. It is flamboyant and in your face but also is delivered with such skill and grace that you can't help but be enchanted by it.

This album is a great opera-like experience that they managed to do. It sounds the best as a whole, but obviously it has some incredible highlights which are Bohemian Rhapsody (one of the best songs of all time), suprisingly beautiful '39 and mostly great Prophet's Song also Death On Two Legs is amazing. The best Queen album for sure.

As with most Queen albums, there is some brilliance and a lot of mediocrity. Their greatest hits albums are incredible but the studio albums are very average. Half of this album is excellent - Death on Two Legs, 39, You're My Best Friend, Sweet Lady and of course one of the best songs ever written Bohemian Rhapsody. But the rest of it is so average.

I agree wholeheartedly with the comments of PeterSmith and planetneutral - if they had released studio albums every 3 years instead of every year over the 70s and 80s so they didn't need to pad them out with filler they definitely would have written at least one of my top 10 albums. The singles they wrote during that period were just immense.

This is such an odd album. It's not particularly long, but the difference between the best and worst tracks is staggering. The best tracks are some of the best of all time from any artist. But then on the other hand, 1/3 of the album is completely forgettable. Overall, still a brilliant listen because of the gems, though.

this really is extraordinary. fantastically paced with defined direction meant to entertain and delight

Just listened to this again, forgot how cool the songs are. Not every track is perfect, but they are all worth listening to.

Your feedback for A Night At The Opera