Toys In The Attic (studio album) by Aerosmith 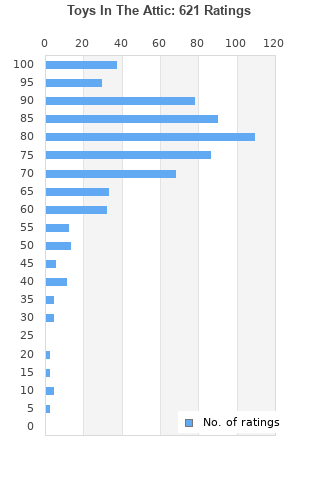 Vtg Aerosmith "Toys in the Attic" CBS33479 8-Track Classic Rock Orange
Condition: Acceptable
Time left: 5h 56m 35s
Ships to: Worldwide
$15.95
Go to store
Product prices and availability are accurate as of the date indicated and are subject to change. Any price and availability information displayed on the linked website at the time of purchase will apply to the purchase of this product.  See full search results on eBay

Toys In The Attic is ranked as the best album by Aerosmith. 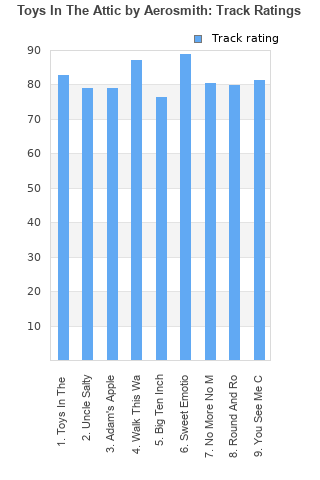 Toys In The Attic rankings

Toys In The Attic collection

Toys In The Attic ratings

Rating metrics: Outliers can be removed when calculating a mean average to dampen the effects of ratings outside the normal distribution. This figure is provided as the trimmed mean. A high standard deviation can be legitimate, but can sometimes indicate 'gaming' is occurring. Consider a simplified example* of an item receiving ratings of 100, 50, & 0. The mean average rating would be 50. However, ratings of 55, 50 & 45 could also result in the same average. The second average might be more trusted because there is more consensus around a particular rating (a lower deviation).
(*In practice, some albums can have several thousand ratings)
This album is rated in the top 4% of all albums on BestEverAlbums.com. This album has a Bayesian average rating of 77.4/100, a mean average of 76.5/100, and a trimmed mean (excluding outliers) of 77.5/100. The standard deviation for this album is 16.1.

Toys In The Attic favourites

Toys In The Attic comments

As I'm not very familiar with Aerosmith, this early album shows some promising things that I like.
Great riffs and solid guitar work.

This is a pretty badass album. You can definitely see how influential this album was on hard rock and heavy metal in the 80s and even the 90s grunge, alt-rock and alt-metal genres. The title track is straight up hard rock with a healthy dose of metal. "Walk This Way" and "Sweet Emotion" are classics, with the latter borderlining on metal. "You See Me Crying" is a solid power ballad. "Big Ten Inch Record" is hilarious and I like the throwback R&B sound it replicates. "Round and Round" is a kickass song. "Adam's Apple" and "Uncle Salty" are good, but in my opinion they are the weakest tracks.

Why do these guys get so much crap? I legitimately enjoy pretty much every song and/or album I've heard by them. I even chuckled at the Big Ten Inch Record joke because for some reason I didn't see it coming.

Aerosmith at their 70's peak!

I really don't understand people saying this album only has Walk this Way or Sweet Emotion, and lacks consistency. IMO this is a very consistent album, with only Round and Round and Big Ten Inch not grabbing me in some way (although 10" is pretty amusing). While all the songs are hard rock (cept You See Me Cryin), none of them sound like duplicates, each song having a distinctive feel. The title track is almost proto-thrash in its tempo, and also highlights one of the two main things that I think makes Aerosmith special: the guitar interplay between Whitford and Perry. Adam's Apple (among other tracks) highlights the other thing: Steven Tyler. While his style is certainly a matter of taste (no one would call him the most talented vocalist around), I find his shouts and yowls and general high energy level to be very entertaining to listen to.
While the lyrics on this album are certainly not 'deep,' I think it would be a mistake to call them bad. Adam's Apple may just be about sex, but I think the metaphors and whatnot are entertaining.
Honestly, I think my overall point here is that this is a very entertaining album if you like hard rock. It may not be groundbreaking or particularly deep, but it has some very strong songs played by one of the most distinct rock groups ever. Sometimes, that's all you want to listen to.

Decent Album, but not in the best of 1970s, 2 awesome songs, the others just normal good

Your feedback for Toys In The Attic