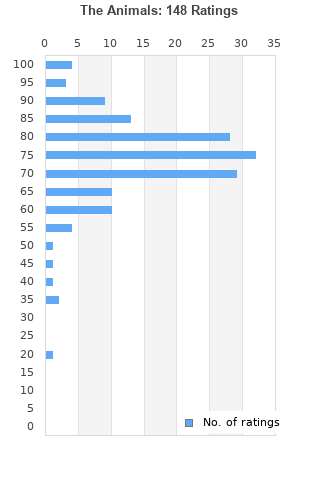 Irina Baronova,"Carnival of the Animals" Rare 7" yellow vinyl EP-7EG 134
Condition: Used
Time left: 2m 48s
Ships to: Worldwide
£10.00
Go to store
Product prices and availability are accurate as of the date indicated and are subject to change. Any price and availability information displayed on the linked website at the time of purchase will apply to the purchase of this product.  See full search results on eBay

The Animals is ranked as the best album by The Animals. 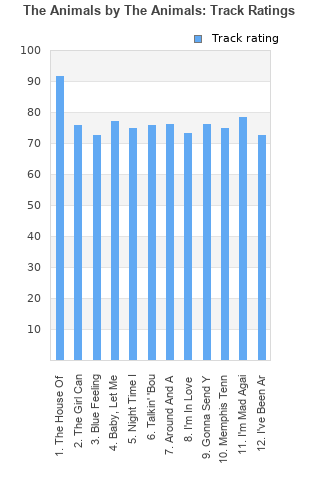 Rating metrics: Outliers can be removed when calculating a mean average to dampen the effects of ratings outside the normal distribution. This figure is provided as the trimmed mean. A high standard deviation can be legitimate, but can sometimes indicate 'gaming' is occurring. Consider a simplified example* of an item receiving ratings of 100, 50, & 0. The mean average rating would be 50. However, ratings of 55, 50 & 45 could also result in the same average. The second average might be more trusted because there is more consensus around a particular rating (a lower deviation).
(*In practice, some albums can have several thousand ratings)
This album is rated in the top 9% of all albums on BestEverAlbums.com. This album has a Bayesian average rating of 75.8/100, a mean average of 75.0/100, and a trimmed mean (excluding outliers) of 76.0/100. The standard deviation for this album is 12.1.

Best tracks: The House of the Rising Sun, I'm Mad Again
Worst tracks: Blue Feeling, Baby Let Me Take You Home, Night Time Is the Right Time, I've Been Around

Straight ahead, well produced (especially for 1964) garage rock albums. Eric Burdon has one of the best voices in rock and the rest of the band sounds great. Gets a little bit repetitive towards the back half of the album, but taken in bites this is a great slice of early rock music.

A very strong debut. Maybe even better than the Rolling Stones 64 debut.
The band sound very tight and clear, and the bass lines are glorious.
A commonplace would be to say that "House of the rising sun" is the highlight. HOTRS is the best track, but the real highlight is Eric Burdon's powerful and deep voice through the entire record. His performance is almost unbelievable.

The first track is deservedly the best known, but there are some other strong tracks here as well. Solid debut.

Naples is right... House of the Rising Sun is an all-time epic track.

Your feedback for The Animals