A Hard Day's Night (soundtrack album) by The Beatles 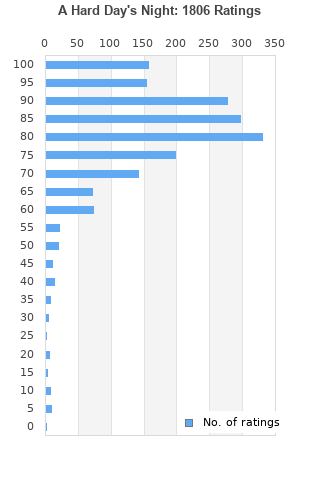 A Hard Day's Night is ranked 9th best out of 66 albums by The Beatles on BestEverAlbums.com.

The best album by The Beatles is Abbey Road which is ranked number 3 in the list of all-time albums with a total rank score of 74,931. 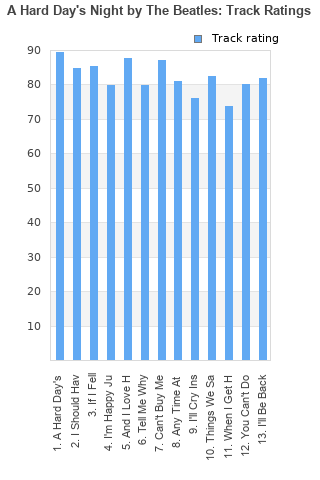 Rating metrics: Outliers can be removed when calculating a mean average to dampen the effects of ratings outside the normal distribution. This figure is provided as the trimmed mean. A high standard deviation can be legitimate, but can sometimes indicate 'gaming' is occurring. Consider a simplified example* of an item receiving ratings of 100, 50, & 0. The mean average rating would be 50. However, ratings of 55, 50 & 45 could also result in the same average. The second average might be more trusted because there is more consensus around a particular rating (a lower deviation).
(*In practice, some albums can have several thousand ratings)
This album is rated in the top 1% of all albums on BestEverAlbums.com. This album has a Bayesian average rating of 81.4/100, a mean average of 80.1/100, and a trimmed mean (excluding outliers) of 81.4/100. The standard deviation for this album is 15.5.

Most consistant of the ones before Help. Title track, should've known Better, Can't buy me love, And i love her. The latter half sinks a bit in consistancy, but still a safe top 10 Beatles album. 10/13 Beatles

This is probably the most consistent early Beatles album and although my favorite tracks from that period land on Help! I enjoy a lot of material here too.
Best tracks: A Hard Day's Night, Things We Said Today, If I Fell, Any Time At All

This is the beginning of that transition between the purely pop Beatles and what they would eventually become.

The Album that started the bealtes progression into betterquality songs, melodies and songwriting
some good john songs and some others paul songs, the greatest duo

Early 60's pop rocknroll masterpiece. All songs written by Lennon McCartney, novelty at a time. Great vocals, each song is catchy, some are exceptionally great. Underrated on this site, how can it be below help (great album too tho), let it be or magical mystery tour and have rating of less than 90

magnificent especially for the time

a very strong album, but the second side stumbles a bit compared to side A

So many pop/rock gems it feels unfair for everyone else trying to compete with that.

Your feedback for A Hard Day's Night