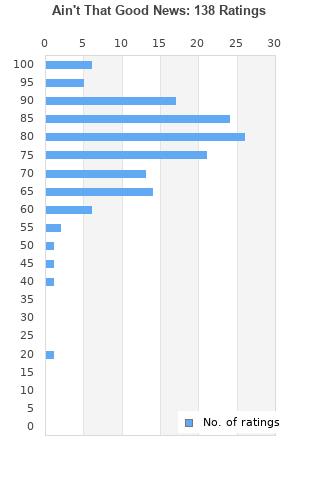 Ain't That Good News is ranked 3rd best out of 25 albums by Sam Cooke on BestEverAlbums.com.

The best album by Sam Cooke is Night Beat which is ranked number 1404 in the list of all-time albums with a total rank score of 1,252. 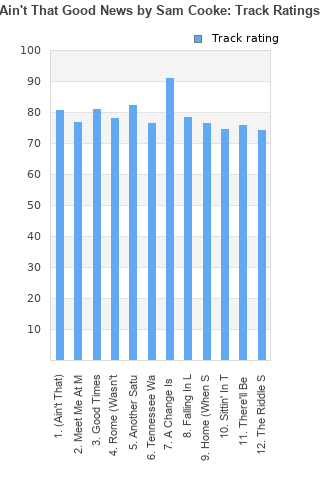 Rating metrics: Outliers can be removed when calculating a mean average to dampen the effects of ratings outside the normal distribution. This figure is provided as the trimmed mean. A high standard deviation can be legitimate, but can sometimes indicate 'gaming' is occurring. Consider a simplified example* of an item receiving ratings of 100, 50, & 0. The mean average rating would be 50. However, ratings of 55, 50 & 45 could also result in the same average. The second average might be more trusted because there is more consensus around a particular rating (a lower deviation).
(*In practice, some albums can have several thousand ratings)
This album is rated in the top 3% of all albums on BestEverAlbums.com. This album has a Bayesian average rating of 78.0/100, a mean average of 77.9/100, and a trimmed mean (excluding outliers) of 78.4/100. The standard deviation for this album is 12.8.

To me, Sam Cooke and Otis Redding are the two greatest male soul singers of all time, and they're like bookends: Redding had the grittier, more hard-edged vocaal style, while Cooke was silky smooth, more of a charmer. Both are absolutely essential to my appreciation of the music of the 1960s, the decade before I was born. I choose Ain't That Good News, Cooke's thirteenth and final album, as the best album from Cooke's surprisingly prolific career, as much on the strength of Cooke's songwriting as his singing. The highlight for me here is the iconic civil rights anthem "A Change Is Gonna Come," one of the most singularly haunting and beautiful songs of the sixties. It remains one of American music's great tragedies that Cooke was taken from us less than a year later at the age of 33 in a bizarre shooting that remains the source of much unresolved speculation and debate.

This is one of those albums that it is quite easy to fall in love with. Almost all the songs are really great. A Change Is Gonna Come is of course the highlight

This is the soulful version of "The Velvet Underground & Nico"

Love side 1 of this.

"Ain't that Good News" from 1964 was the last album Sam Cooke released in his lifetime, and for me it is also one of his most consistent and artistically successful. In 1964 Cooke was more or less a veteran in pop music, but this album clearly (especially the original side 1) proves he was far from finished in his musical development. Cooke is often called the father of soul, and not least because the songs he wrote and recorded during the last 2-3 years of his lifetime. Cooke had in most of his songs an ease and light way of dealing with both very personal and serious themes, and this is one the characteristics of this album, where most of his original songs could well be called classics. Good examples are "Good Times", "Another Saturday Night", "Meet Me at Mary's Place" and of course "A Change Is Gonna Come" which came two exemplify the 1960s' Civil Rights Movement.

On tracks like "Ain't that Good News", "Good Times" and his touching interpretation of "The Riddle Song" Cooke shows that he is in tune with the new sounds that streamed to America from Europe, especially thanks to The Beatles.

This is undoubtedly Cooke's most modern album, although some of the more orchestrated tracks on the original side two, may be mostly rooted in the 1950s.

Chock full of Sam Cooke hits... His voice is so natural, and the tunes flow. Underrated gem of the 60s.

Your feedback for Ain't That Good News