The Times They Are A-Changin' (studio album) by Bob Dylan 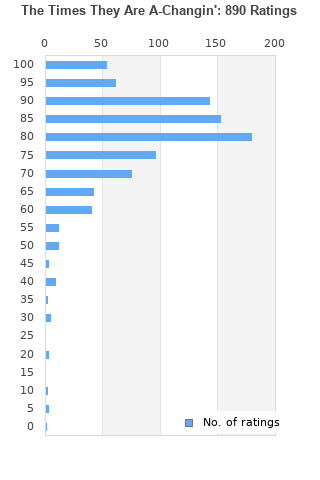 BOB DYLAN: the times they are a-changin' COLUMBIA 12" LP
Condition: Used
Time left: 6h 39m 8s
Ships to: Worldwide
$20.00
Go to store
Product prices and availability are accurate as of the date indicated and are subject to change. Any price and availability information displayed on the linked website at the time of purchase will apply to the purchase of this product.  See full search results on eBay

The Times They Are A-Changin' is ranked 7th best out of 70 albums by Bob Dylan on BestEverAlbums.com.

The best album by Bob Dylan is Highway 61 Revisited which is ranked number 23 in the list of all-time albums with a total rank score of 40,931.

Listen to The Times They Are A-Changin' on YouTube 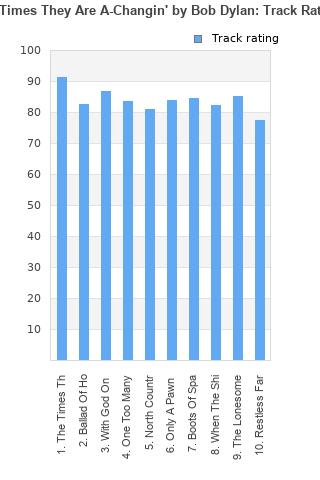 The Times They Are A-Changin' rankings

The Times They Are A-Changin' collection

The Times They Are A-Changin' ratings

Rating metrics: Outliers can be removed when calculating a mean average to dampen the effects of ratings outside the normal distribution. This figure is provided as the trimmed mean. A high standard deviation can be legitimate, but can sometimes indicate 'gaming' is occurring. Consider a simplified example* of an item receiving ratings of 100, 50, & 0. The mean average rating would be 50. However, ratings of 55, 50 & 45 could also result in the same average. The second average might be more trusted because there is more consensus around a particular rating (a lower deviation).
(*In practice, some albums can have several thousand ratings)
This album is rated in the top 2% of all albums on BestEverAlbums.com. This album has a Bayesian average rating of 80.5/100, a mean average of 79.4/100, and a trimmed mean (excluding outliers) of 80.6/100. The standard deviation for this album is 14.7.

The Times They Are A-Changin' favourites

The Times They Are A-Changin' comments

Best tracks: The Times They Are-A Changin, Boots of Spanish Leather, When the Ship Comes In
Worst track: Restless Farewell

Not a personal favourite of Dylan's, but still a great record, especially the iconic title track!

#6 on my list of greatest Dylan albums. Very politcally driven album. An acoustic folk classic. Noteable tracks: Times They are a-Changin', The Lonesome Death of Hattie Carol, One Too Many Mornings, Only a Pawn in Their Game, With God on Our Side.

My least favourite of the folk albums, although Hattie Carroll is a great track.

Political songs plus a pair of sensitive cuts, ‘The Times They Are A-Changin' franked Bob Dylan as the new voice of his generation

Incredibly powerful album BEFORE his best suit of albums

One of the most well-written albums I've ever heard. Unfortunately the music is lacking. There isn't much originality in Dylan's guitar playing and a lot of the melodies sound like other songs of his. The album works really well for the first couple of listens but once you know the lyrics the music shows itself as drier than I'd like it to be. The songs are great stories but there is little replay value. The "Girl from the North Country Fair"-sounding "Boots of Spanish Leather" is my favorite on the album and one of Dylan's most well-written songs in my opinion. I suspect that "When the Ship Comes In" served as some sort of inspiration for The Tales of the Black Freighter in The Watchmen graphic novel seeing as they both draw parallels to the song "Pirate Jenny".

Don't care what the rankings say, this is a better album than Freewheelin'.

Favorites: With God On Our Side, Only A Pawn In Their Game, Lonesome Death of Hattie Carroll

Bob Dylan didn't slow down after "Freewheelin'", and that's evident here. "The Times" is one of his greatest masterpieces, period.

Top Tracks: "The Times They Are A-Changin'", "With God On Our Side", "The Lonesome Death of Hattie Carroll"

Surprising but I think it's a little too political. Dylan's usually good with political stuff, but here it gets overbearing and detracts from the overall "musicality" of the album, I think.

Your feedback for The Times They Are A-Changin'