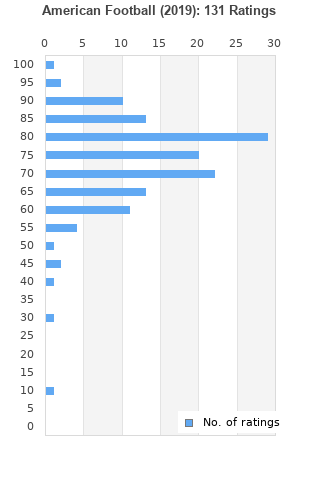 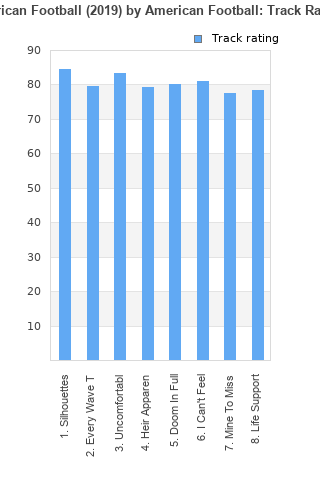 Rating metrics: Outliers can be removed when calculating a mean average to dampen the effects of ratings outside the normal distribution. This figure is provided as the trimmed mean. A high standard deviation can be legitimate, but can sometimes indicate 'gaming' is occurring. Consider a simplified example* of an item receiving ratings of 100, 50, & 0. The mean average rating would be 50. However, ratings of 55, 50 & 45 could also result in the same average. The second average might be more trusted because there is more consensus around a particular rating (a lower deviation).
(*In practice, some albums can have several thousand ratings)
This album has a Bayesian average rating of 74.1/100, a mean average of 73.3/100, and a trimmed mean (excluding outliers) of 74.2/100. The standard deviation for this album is 12.8.

A perfectly good album, but when you’re following up two fantastic albums, it kinda falls to the wayside. Still plenty of quality music, but nothing as iconic as the past two.

I can't really add anything to this page that other (better) reviewers haven't already said, but American Football (2019) falls a bit flat. It's music that lands softly and squarely in the middle of the river of ether separating shoegaze and dream pop, and fails to really excel at either. It's mesmerizing at it's best, but even the strongest songs here have consistency issues.

20 fucking years. Two decades of American Football's eponymous debut album pioneered the mid-west emo. AF developed a melancholic style backed up by arpeggios and a melodic play with a technicity close to math-rock. The band led by Mike Kinsella exploded in 1999 after this magnificent first record and a handful of basement shows. It was not until 2014 with the reissue of this same album to see the band back on stage. In 2016 came a second LP, still full of nostalgia but really uninteresting. Back in 2019. We do not expect much from American Football, and that's where we welcome. For if Urbana's band continues to dilute his eighth notes in a spleen close to the ambient, he succeeds where he failed two years earlier. That is to say, he again shapes delicate and memorable melodies by superimposing the layers as he knew how to do it well. American Football finally condenses with talent its know-how. And if obviously we do not find our first adolescent emotions, the charm undeniably operates.

One of the top albums this year

I like every song in here, but as an album it gets a bit boring and uncohesive. 7/10.

A nice improvement over the good-but-underwhelming LP2.

What a lovely surprise!

Atmospheric and just gorgeous. What a lovely record. Right in my wheelhouse.

Boasting the wonderful and intricate instrumentals I've known and loved them for, as well as the poignant and heartful lyricism. Never in my wildest dreams would I expect a comeback of this level.

Your feedback for American Football (2019)