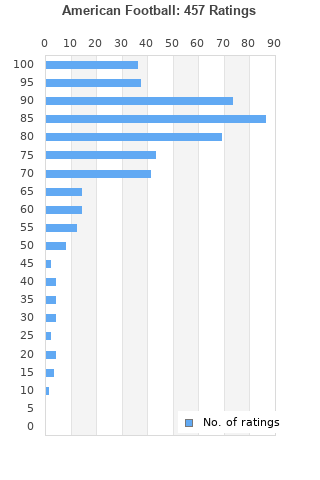 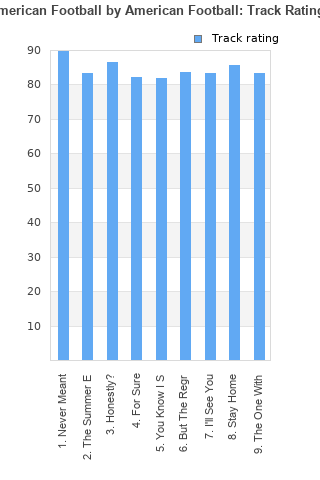 Rating metrics: Outliers can be removed when calculating a mean average to dampen the effects of ratings outside the normal distribution. This figure is provided as the trimmed mean. A high standard deviation can be legitimate, but can sometimes indicate 'gaming' is occurring. Consider a simplified example* of an item receiving ratings of 100, 50, & 0. The mean average rating would be 50. However, ratings of 55, 50 & 45 could also result in the same average. The second average might be more trusted because there is more consensus around a particular rating (a lower deviation).
(*In practice, some albums can have several thousand ratings)
This album is rated in the top 2% of all albums on BestEverAlbums.com. This album has a Bayesian average rating of 80.3/100, a mean average of 79.1/100, and a trimmed mean (excluding outliers) of 80.5/100. The standard deviation for this album is 16.7.

An emotional listen that is intelligent in its composition and creates a soothing but rich experience for the listener. The whole album is expressive and filled with personality which made it such an easy record to fall in love with. The instrumentals really stand out on this release with them all combining to create this atmosphere which is so easy to get lost in. Every time I put this record on I get swept away by the music and just admire the genius on display. Instrumentally, it is diverse and beautifully performed by all members of the group. They are so delicate and smooth with the way they play that they convey emotion to us so well and so powerfully that we are easily overwhelmed by it. They are just phenomenal all the way through and I think the quality of instrumentation on here goes extremely under appreciated. Furthermore, the vocal is perfect for the style they are going for and in my opinion is one of the most important pieces of bringing this whole album together. The record feels extremely cohesive as the music is focused with hardly a second wasted which means there is no filler on this album at all. Finally, the lyrics are rich and give us loads to explore when you come back to revisit this record which you will do as it is that good. Overall, in terms of atmosphere, style and quality it is one of the greatest albums ever recorded and it deserves to be appreciated for how brilliant it is.

Who new math rock could be this emotional? The chime-like guitars are infectious, I can't get enough of them. The drumming is great as well. The only real complaint I have is the vocals, they don't really sound all that great sometimes, especially when they're doubled up.

If it weren't for the harsh vocals, i could really love this. The drums are amazing though (both performance and sound).

American Football is one of the pioneers of emo and math rock. American Football is an honest music, touching with sincerity, pure and uncompromising. A brilliant and bright guitar sound, on which are added simple words and unpretentious ... This sincerity is felt throughout the album. The changeable and unstable metric illustrates the human side of the work, a kind of constant and touching imperfection, an impression of never being able to feel fully reassured but to be at the same time immersed in a serene and dreamy state. The original tunings of the guitars also reflect a desire to reveal themselves completely, to show an authentic facet of the divergences characteristic of human nature: no, the emotion is not monochrome at American Football, it is calm and eventful, passionate and soothed . Know that this album deserves to be tamed, both from a musical and a textual point of view, because emotion and reflection are there. For sure ...
"Let's pretend everything and anything, between you and me, was never meant ..."

Returned to this album recently and can't stop listening to it.

I wish I could delete my earlier comment, the regrets are killing me.

To understand American Football you need to appreciate their style of music . They are exponents of what is referred to a Math Rock a gene of music characterised by non-standard time signatures such as 7/8 , 11/8 or 13/8 producing a rhythmic complexity that is counter intuitive to rocks standard 4/4 . I explained it to a friend as "Rock Free-form Jazz Like " . And here in lies why there is such polarising opinions about this group/album . On first listen the listener is left confused with the free form irregular nature of the content , but repeat listens reveals a layered depth and musical skill not initially appreciated . I firmly believe many listeners dismiss this album after 1 or 2 listens , where as the enlightened ones go back and back and fully peal back the onion layers to reveal an inner beauty within this album

On a side note these boys really need to use some imagination with their release tiles , we have

ANYTHING would be a better title than 'American Football'
How about 'Free Form Rock In 11/8 ' ? or 'OK Maths' ?

Finally the Deluxe Version is pretty much garbage , you get 10 additional tracks all of which are extremely poor quality live , boom box recorded or demo quality tracks. If your a super fan check it out other wise stick to the original 9 track release

Ayyyyy! I finally GOT it! This album has seemed so dumb for me to me for so long. Dry, repetitive, bland, you name a criticism that has been stated below and I have had that opinion. But after just coming back to it again and again periodically, it finaly clicked, as all good albums do. There is something really seductive in the layered guitars and strangely static songwriting. The songs don't really go anywhere at all, and it can be hard to understand why at first. But I eventually realized that this album is just the musical distillation of small town life. The cover, the backstory, etc all point toward it, but even structure wise, it feels meandering and aimless, waiting for something to happen. But nothing ever does, and things are always the same, and yet you can't help but love your little nondescript cornfield town.

I don't think it's a coincidence that Talk Talk's later works and this album have both made their genius apparent to me around the same time. Though they are different in many ways, they both have a kind of featurelessness to them, as described a but above. They are unstructured and meandering, and if you are not listening attentively, it feels like the same thing over and over. But just as there is beauty in the use of silence by Talk Talk, there is beauty in the use of repetition by American Football.

Very soothing. Probably gonna listen to it again, but I wish I could see why so many people love it that much. I think I'm missing something.

It's been 2 Months since she has left. It's Time to move on, now or never

A masterpiece in its own regard, American Football by American Football passes the test of time as its sound still resonates with audiences scattered all throughout the rock genre (indie, emo, alternative, etc..) Truthfully one of the very best albums I have had the good fortune of listening too. Part of me wishes I could go back to when I hadn't heard it just to experience the album again.

Notable Tracks: I'll See You When We're Both Not So Emotional, But The Regrets Are Killing Me, Never Meant, The One With The Wurlitzer

Your feedback for American Football