Up The Bracket (studio album) by The Libertines 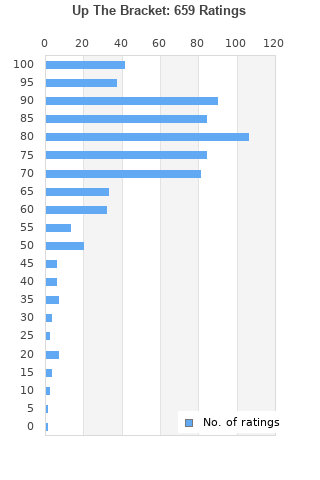 Up The Bracket is ranked as the best album by The Libertines. 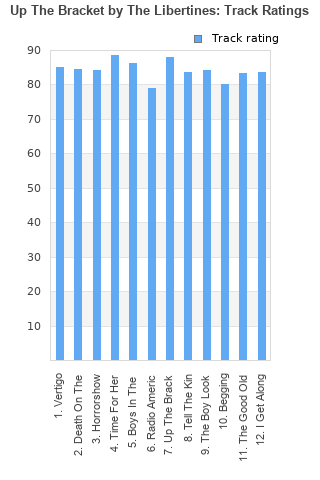 Up The Bracket rankings

Up The Bracket collection

Up The Bracket ratings

Rating metrics: Outliers can be removed when calculating a mean average to dampen the effects of ratings outside the normal distribution. This figure is provided as the trimmed mean. A high standard deviation can be legitimate, but can sometimes indicate 'gaming' is occurring. Consider a simplified example* of an item receiving ratings of 100, 50, & 0. The mean average rating would be 50. However, ratings of 55, 50 & 45 could also result in the same average. The second average might be more trusted because there is more consensus around a particular rating (a lower deviation).
(*In practice, some albums can have several thousand ratings)
This album is rated in the top 4% of all albums on BestEverAlbums.com. This album has a Bayesian average rating of 77.7/100, a mean average of 76.2/100, and a trimmed mean (excluding outliers) of 77.7/100. The standard deviation for this album is 16.9.

Up The Bracket favourites

Up The Bracket comments

This album is a short and sweet thrill ride that gives you no real time to get bored. The choruses are snappy and work to perfection on songs like Death On The Stairs, Time For Heroes and Up The Bracket. This trio is the best in terms of quality that this album delivers. The rest of the tracks are pretty decent and are easy to listen along to but don't meet the calibre of the three big songs. Lyrically, the record is nothing spectacular but the vocal delivery is very strong and classically British. Side 2 can feel a bit weaker and does drag the album down a little in terms of quality. Overall, a fun record that is very easy to pick up and play and never really get tired of.

Solid album! The songs are punchy and to the point while feeling a little rough around the edges at times too (which is not necessarily a bad thing). The first half is definitely the strongest part of the album. With catchy choruses and guitar riffs, 'Death On The Stairs', 'Horror Show', and 'Time For Heroes' are the stand-out tracks for me. All three songs occur back-to-back near the start, so this album really hits the ground running. However, the album starts to feel a bit weaker after the halfway point. I wouldn't go as far as to say that the second half is bad, but it does feel less compelling. Perhaps this is because the record doesn't vary that much in terms of tone and songwriting, so things feel a little less fresh near the end. On the other hand, Radio America nicely switches up the pace near the middle, so at the same time this album doesn't stay at one level for its entire duration, which I appreciate. All in all, I enjoy this album while listening to it, although it doesn't leave a too much of an impact with me when it's done. Nevertheless, I think it's a good record. Although their sound is reminiscent of other bands of the era, they still manage to hold their own here. If you like garage rock/2000s indie rock, it's worth giving this one a try!

First half is like twice better than 2nd half, which really felt a little off :/, great album overall

Top Tracks: "Vertigo", "Death on the Stairs", "Time for Heroes"

Never got into them at the time - I was 14 so probably prime audience. I loved The Strokes but I couldn't get the hype surrounding Pete and Carl. The minimal output vs endless column inches for a so-called lyrical genius pretty much ruined any hope for me. Listening to this 16 years later (and a few times in between)... yeah, still not for me.

"Horror Show" and "Up the Bracket" are great songs, but most of this album is pretty forgettable. Kind of overrated in retrospect.

Favoritas: Time For Heroes, The Boy Looked At Johnny, Up The Bracket, Boys In The Band

This band is so british it's not even funny.

Your feedback for Up The Bracket