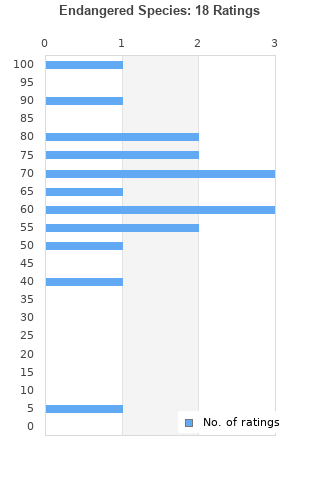 LYNYRD SKYNYRD - Endangered Species (1994 13 trk CD) Johnny Van Zant *NEAR MINT*
Condition: Very Good
Time left: 1d 3h 37m 35s
Ships to: Worldwide
£4.95
Go to store
Product prices and availability are accurate as of the date indicated and are subject to change. Any price and availability information displayed on the linked website at the time of purchase will apply to the purchase of this product.  See full search results on eBay

Endangered Species is ranked 15th best out of 38 albums by Lynyrd Skynyrd on BestEverAlbums.com.

The best album by Lynyrd Skynyrd is (pronounced 'lĕh-'nérd 'skin-'nérd) which is ranked number 435 in the list of all-time albums with a total rank score of 4,520. 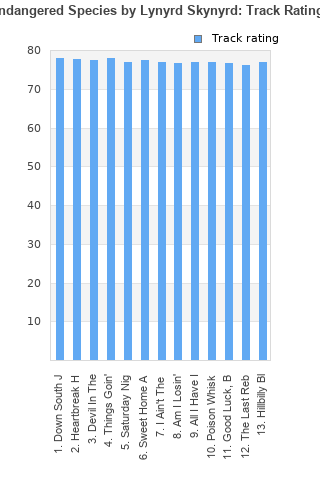 Rating metrics: Outliers can be removed when calculating a mean average to dampen the effects of ratings outside the normal distribution. This figure is provided as the trimmed mean. A high standard deviation can be legitimate, but can sometimes indicate 'gaming' is occurring. Consider a simplified example* of an item receiving ratings of 100, 50, & 0. The mean average rating would be 50. However, ratings of 55, 50 & 45 could also result in the same average. The second average might be more trusted because there is more consensus around a particular rating (a lower deviation).
(*In practice, some albums can have several thousand ratings)
This album has a Bayesian average rating of 67.6/100, a mean average of 64.4/100, and a trimmed mean (excluding outliers) of 64.4/100. The standard deviation for this album is 20.1.

They should have gone extinct.

The best of Lynyrd Skynyrd in all acoustic which sound, sorry the purists, better than the original versions! I'm a real Ronnie Van Zant fan, but it is impossible not to acknowledge the technical superiority of his brother Johnny on vocals here. In the first 2 albums he recorded with the band (SOUTHERN BY THE GRACE OF GOD and 1991) Johnny was not very convincing, but in THE LAST REBEL and specially this album, he acquired a maturity in her voice and in her interpretations that made it one of my 10 favorite voices of all time. Known old songs in new arrangements (such as "Saturday Night Special"), less remembered old songs ("Poison Whiskey"), an inspired Elvis cover ("Heartbreak Hotel") and some new songs (especially "Good Luck, Bad Luck" and the excellent ballad "All I Have is A Song") make this the coolest Skynyrd album to me... and my all time favorite acoustic album.

Your feedback for Endangered Species