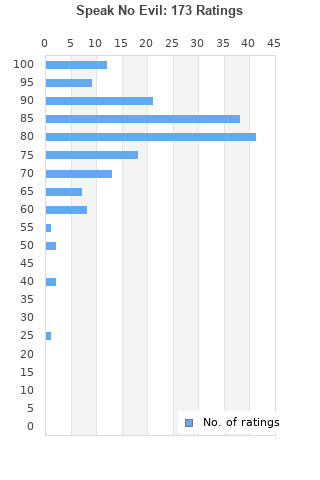 Speak No Evil is ranked as the best album by Wayne Shorter. 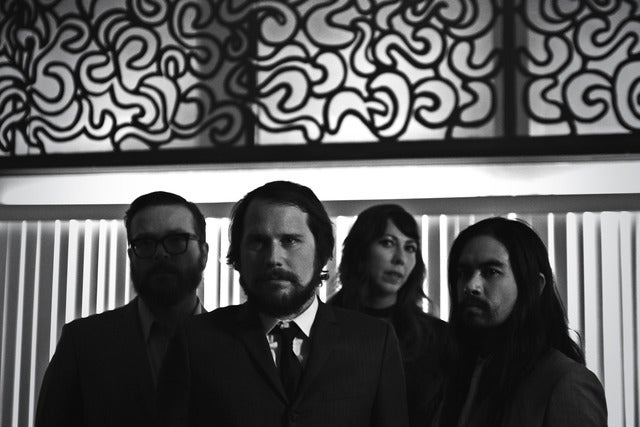 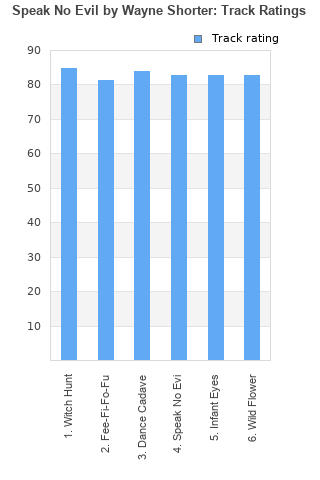 Rating metrics: Outliers can be removed when calculating a mean average to dampen the effects of ratings outside the normal distribution. This figure is provided as the trimmed mean. A high standard deviation can be legitimate, but can sometimes indicate 'gaming' is occurring. Consider a simplified example* of an item receiving ratings of 100, 50, & 0. The mean average rating would be 50. However, ratings of 55, 50 & 45 could also result in the same average. The second average might be more trusted because there is more consensus around a particular rating (a lower deviation).
(*In practice, some albums can have several thousand ratings)
This album is rated in the top 1% of all albums on BestEverAlbums.com. This album has a Bayesian average rating of 80.9/100, a mean average of 80.6/100, and a trimmed mean (excluding outliers) of 81.4/100. The standard deviation for this album is 12.0.

There are some fantastic compositions on here but also a few that miss the mark by a little way making for a slightly inconsistent listen on the whole. The performances on the stronger tracks are outstanding with the best moments coming on Witch Hunt, Speak No Evil and Infant Eyes. The title track is probably my favourite of the three as instrumentally it is just so powerful and emotive. The piano, trumpet and sax are at their peak as well on this track and absolutely command the music. When all of them are combined together and they are backed well on percussion and bass it makes for a beautiful composition. However, the other tracks I haven't mentioned do feel a bit empty in comparison and can get a little repetitive. They just lack the experimentation and energy of the other songs and could do with a bit more life injected into them. Overall, if this record was consistent it would be phenomenal but it can't do that so is held back in my opinion.

One of the classic HardBop albums from Blue Note. I love the Blue Note album covers.

This is a truly top shelf Shorter album that cemented his legacy as a composer as well as a player. His ability to both fuse and transcend multiple jazz subgenres here is remarkable.

This album is five stars. Wayne is a modern composer equal to any previous or current greats, and this work shows his talents unlike any other album of his, and there are many great albums by Wayne Shorter. The emotions that I feel when listening are of every identifiable type. The compositions are flawless, and timeless on this album. Jones drives the transitions as Jones was perfect at doing, and he keeps this album alive for me. Wayne's work, of which this album is the highlight, will always be timeless, and will always have a deep effect on my heart. I mentioned emotions. Shall I name them? No, that would be silly. But if you don't own this album, or haven't given it a proper listen at a proper time in your life, then you are missing an essential recording that undoubtedly has brought many musicians countless hours of joy. I'm going through this particular rating system, and finding a few albums that are low down on the ratings, and bringing these to the attention of the listener, so that others can understand how important this music is, and share my joy.

I hope I can run into Wayne some day. If I meet him I will try not to doat on his glorous past, as this may not be welcome. But I will definitely fall all over myself trying to relate to him just how he affected my well-being for so many years of listening. He is a living legend, and society fails to see this, but will some day recon with his greatness. Thank you Wayne Shorter.

Synthesising hard bop, modal jazz and free jazz, Shorter's brilliant compositions and tender ballads heralded in a new era of emotions in jazz music. Aided by the accomplished playing of Hubbard on horns, Hancock on piano, Carter on bass and Jones on drums, the sound on this album is melodically intense, albeit not particularly revolutionary.

Your feedback for Speak No Evil