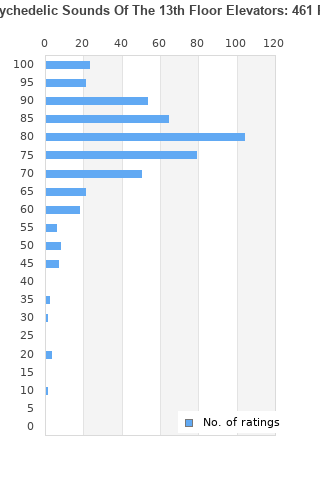 The Head And The Heart - Every Shade of Blue Tour 2022
Ascend Amphitheater, Nashville, United States.

The Psychedelic Sounds Of The 13th Floor Elevators track list 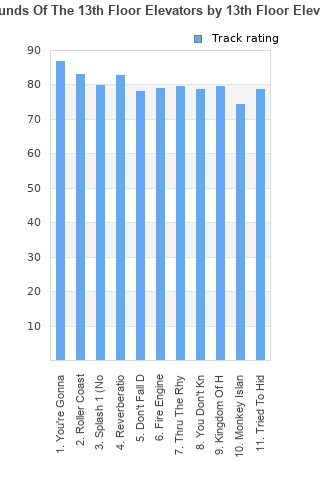 The Psychedelic Sounds Of The 13th Floor Elevators rankings

The Psychedelic Sounds Of The 13th Floor Elevators collection

The Psychedelic Sounds Of The 13th Floor Elevators ratings

Rating metrics: Outliers can be removed when calculating a mean average to dampen the effects of ratings outside the normal distribution. This figure is provided as the trimmed mean. A high standard deviation can be legitimate, but can sometimes indicate 'gaming' is occurring. Consider a simplified example* of an item receiving ratings of 100, 50, & 0. The mean average rating would be 50. However, ratings of 55, 50 & 45 could also result in the same average. The second average might be more trusted because there is more consensus around a particular rating (a lower deviation).
(*In practice, some albums can have several thousand ratings)
This album is rated in the top 2% of all albums on BestEverAlbums.com. This album has a Bayesian average rating of 78.7/100, a mean average of 78.0/100, and a trimmed mean (excluding outliers) of 78.8/100. The standard deviation for this album is 13.0.

The Psychedelic Sounds Of The 13th Floor Elevators favourites

The Psychedelic Sounds Of The 13th Floor Elevators comments

If it would remain quality of first four tracks throughout the tracklist it would be one of the greatest albums of 1960s, it's still very influential, but sounds like they were losing ideas by the end of it.

One of the most underrated albums of all time. That's how GOOD it is!

Really solid album. "You're Gonna Miss Me" would be the choice cut on the album, but there is not bad track here. The production isn't that great, but for psychedelic garage music, it's suits the murkiness.

Listening to this album for the first time, I was startled by just how many psych rock and pop bands and even heavy rock groups that followed the release of this album copied the exact sound of this album, or at least borrowed significant elements from it. Goes to show how influential this thing was.

new to me. decent listen

You're Gonna Miss Me and Reverberation (Doubt) are great, the rest is a solid listen.

The version of the album I own and am reviewing here is a 2003 re-issue on the Fuel2000 record label that is distinctive from the original release. The 2003 re-issue includes the addition of 4 tracks all attributed as "Live". This 2003 re-issue features the following track listing:
1)You're Gonna Miss Me
2)Roller Coaster
3)Splash 1
4) Reverberation
5)Don't Fall Down
6)Fire Engine
7)Thru The Rhythm
8)You Don't Know (How Young You Are)
9)Kingdom Of Heaven
10)Monkey Island
11)Tried To Hide
12)Everybody Needs Somebody To Love (Live)
13)You Really Got Me (Live)
14)Gloria (Live)
15)You're Gonna Miss Me (Live)

Overall, the sound quality of the music on this disc is somewhat muted/distorted, yet one can gather some of the first evidence of a new style of music originating in the U.S. in 1966 - that of "Psychedelic" music.

Good album for me one of the best of Psychedelic Rock. Remember me of Sounds like Jefferson Airplane and the Doors. Nice to have it

This is a really good album even though the recording quality is terrible. It's obvious that the band was heavily influenced by LSD and it shows right from the start if not in the sound of "You're Gonna Miss Me" then certainly in "Roller Coaster". I find myself enjoying the songs towards the beginning but the whole album is still enjoyable. The guitars, vocals and songwriting are all fantastic which would make sense for an album that was the first to be advertised as "psychedelic rock". I played around with the different mixes on spotify and found the 2008 mono mix to be the best. The vocals in the stereo version don't sound right. In addition to the two previously mentioned songs I also liked "Reverberation" and "Thru the Rhythm".

Your feedback for The Psychedelic Sounds Of The 13th Floor Elevators