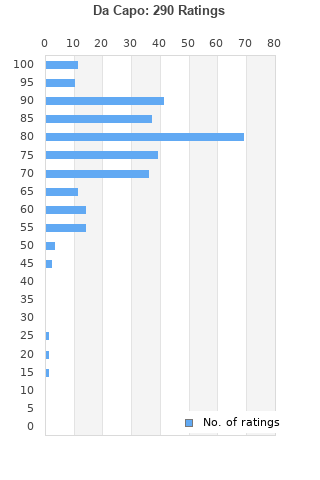 Da Capo is ranked 2nd best out of 18 albums by Love on BestEverAlbums.com.

The best album by Love is Forever Changes which is ranked number 73 in the list of all-time albums with a total rank score of 19,213.

Laufey - Everything I Know About Love Tour
The Loving Touch, Ferndale, United States. 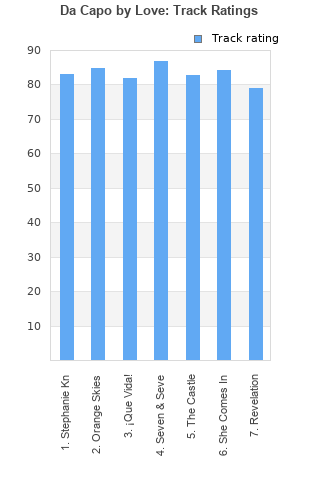 Rating metrics: Outliers can be removed when calculating a mean average to dampen the effects of ratings outside the normal distribution. This figure is provided as the trimmed mean. A high standard deviation can be legitimate, but can sometimes indicate 'gaming' is occurring. Consider a simplified example* of an item receiving ratings of 100, 50, & 0. The mean average rating would be 50. However, ratings of 55, 50 & 45 could also result in the same average. The second average might be more trusted because there is more consensus around a particular rating (a lower deviation).
(*In practice, some albums can have several thousand ratings)
This album is rated in the top 3% of all albums on BestEverAlbums.com. This album has a Bayesian average rating of 78.1/100, a mean average of 77.7/100, and a trimmed mean (excluding outliers) of 78.3/100. The standard deviation for this album is 12.7.

bleck. bland. preferred the 2nd side

What a beautiful and vivacious album

This would easily be the greatest EP of all time if the last track didn't exist (although, it's a bit long for an EP). Every single song is a 10/10 in my books, which even my most favourite album of all time, Sgt. Pepper's, can't do.
This album is so unbelievably amazing besides the risque last song that it blows my mind.

The first side of this album is amazing. Every song is great. It sounds beautiful and the songwriting is fantastic. Arthur Lee is one of the best musicians of the 60s. The backside is alright. It's just blues jamming but there's too much of it that I don't enjoy (like the orgasming or the harmonicas). It's disjointed and a little uncompelling but it's not awful. The record would've been very short without it so it's hard to say that it should've been left off. It's a complete departure from the first half that seems like it's just there to take up space. I've heard they didn't get the sound that they wanted for it and they were trying to replicate their live performances. I really like every song but my favorite is "Que Vida". I love the lyrics and the main riff that sounds like "Eight Days a Week" with a couple extra notes added. If the backside were a little better, this could be considered among the best albums ever but when almost half the album is just ok it's hard to make the case.

“Seven and Seven Is” is probably the first example of garage rock transforming into proto-punk. The rest are great examples of early psychedelic rock. Don’t really get how people seem to think that Forever Changes can compete with this.

A great EP! I could do without that crappy bonus track 'Revelation' though...

Not as brilliant as, Forever changes, the songs just aren't quite as good. But it's a really interesting album, although for me, it's a stepping stone on their way to making their true masterpiece. It's almost impossible to listen to this album without thinking about what comes next. Still a good album though.

To me this is Love's masterpiece.

If this album appears on a year chart for 1967 (and for every other year but 1966) it does not count. Consider this: If the entry did count, would it then be fair to list a 2015 album as a 1950 album? Especially since 1950 have much fewer (and much less popular) albums than 2015, I would consider it manipulating with the rank score system. Also, an isolated 1967 chart tells nothing about how good an album is compared to the same user's 1966 albums, so there's no way really to give a valid score.

Your feedback for Da Capo