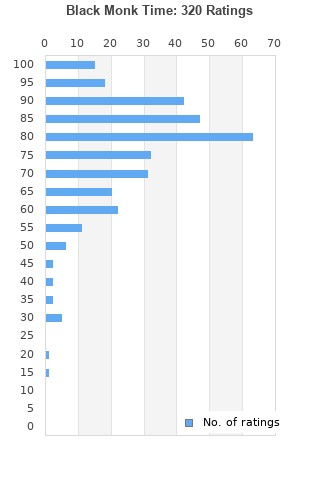 Black Monk Time is ranked as the best album by Monks (US). 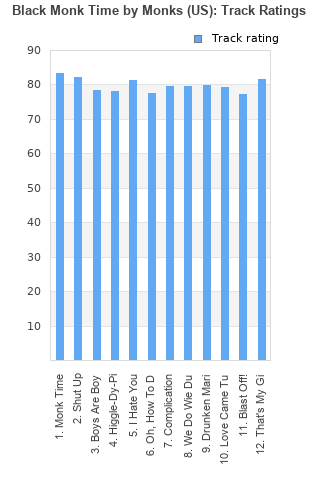 Rating metrics: Outliers can be removed when calculating a mean average to dampen the effects of ratings outside the normal distribution. This figure is provided as the trimmed mean. A high standard deviation can be legitimate, but can sometimes indicate 'gaming' is occurring. Consider a simplified example* of an item receiving ratings of 100, 50, & 0. The mean average rating would be 50. However, ratings of 55, 50 & 45 could also result in the same average. The second average might be more trusted because there is more consensus around a particular rating (a lower deviation).
(*In practice, some albums can have several thousand ratings)
This album is rated in the top 3% of all albums on BestEverAlbums.com. This album has a Bayesian average rating of 77.7/100, a mean average of 76.7/100, and a trimmed mean (excluding outliers) of 77.9/100. The standard deviation for this album is 15.2.

Best tracks: Shut Up, Love Came Tumblin' Down
Worst tracks: I Hate You, Oh How to Do Now, We Do Wie Du

This album was referred to me by a friend who knew that I would be fascinated by the story of the band. My hypothesis is that this album was actually recorded in 1976 and shipped back in time to the 60s. Trust me when I say nothing else sounds like this in 1966. And I mean that in both a good and bad way.

Other than helping pioneer a genre, this album doesn't do too much. The performances are very underwhelming, the singing is pretty awful. Also, this album has no business having banjo on it, it sounds dinky. I am not impressed. I have to give them credit for helping influence punk rock, but The Stooges and The Velvet Underground made much better and interesting music. Another thing, The Psychedelic Sounds of the 13th Floor Elevators came out the same year. I feel like they helped pioneer more with the solitary single You're Gonna Miss Me than any of Black Monk Time.

I was blown away by this album. With or without context it's a great album but given the fact that this came out in 1966, it's incredible. I don't know how much of an impact it had on music because of its limited commercial success but it is raw and gritty before anything else was. The electric sound of the album sounds like something you'd hear on White Light/White Heat but the vocals are more akin to a Beach Boys type band. The lyrical content is like a mix between the two. The songs all sound pretty similar to each other but I don't think that's a knock on it because there was literally nothing else that sounded like any of these songs when they came out. I wish this album would get more attention because I really think it's an important benchmark in popular music. "Shut Up" is my favorite song on the album but I like every single one. The bonus track, "Pretty Suzanne", is also very worth listening to.

Wasn't feeling this at first, but its eclectic variety grew on me

Very weird cultural artifact. The closest the 60s came to punk was a created by an eccentric German nudging a group of American GIs who really just wanted to be the Beatles.

This is a great example of a band saying "screw it" and doing whatever they want. It feels like the band was just like "Hey, no one's gonna hear this album anyways, let's go nuts." It's crazy and goofy and just pure awesome

Your feedback for Black Monk Time