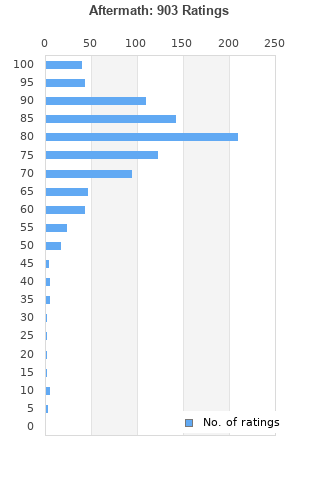 Aftermath is ranked 5th best out of 95 albums by The Rolling Stones on BestEverAlbums.com.

The best album by The Rolling Stones is Exile On Main St. which is ranked number 43 in the list of all-time albums with a total rank score of 26,652. 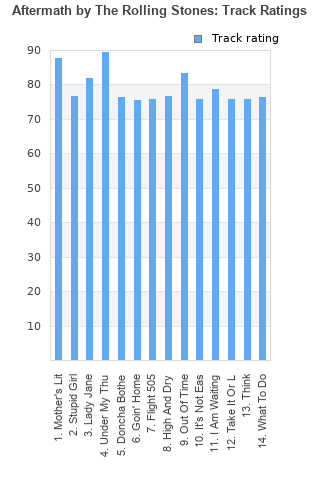 Rating metrics: Outliers can be removed when calculating a mean average to dampen the effects of ratings outside the normal distribution. This figure is provided as the trimmed mean. A high standard deviation can be legitimate, but can sometimes indicate 'gaming' is occurring. Consider a simplified example* of an item receiving ratings of 100, 50, & 0. The mean average rating would be 50. However, ratings of 55, 50 & 45 could also result in the same average. The second average might be more trusted because there is more consensus around a particular rating (a lower deviation).
(*In practice, some albums can have several thousand ratings)
This album is rated in the top 2% of all albums on BestEverAlbums.com. This album has a Bayesian average rating of 78.6/100, a mean average of 77.7/100, and a trimmed mean (excluding outliers) of 78.7/100. The standard deviation for this album is 13.6.

The US version is great start of fairly good Stones 60s run. The best tracks are Paint It Black and Under My Thumb.

This was the first Stones that I ever heard, and it wasn't until way later into their discography that I came to appreciate what this was. A bluesy-er offering, and slides nicely into the discography.

I love the exotic instrumentation on this record

I listened to the US version of Aftermath which features "Paint it Black" (I have no idea how the UK release doesn't have that one) and leaves off a few like "Out of Time" and "Take It or Leave It". It's definitely a good album, but has a lot of filler, especially on the UK edition.

Best song(s): Paint It Black; Under My Thumb; Think

'Lady Jane', 'Under My Thumb' and 'Flight 505' are some favorites here! Sadly, the UK pressing omits possibly one of the Stones greatest tracks of this era, 'Paint It Black'. Still a strong effort nonetheless by one of Britians greatest rock n' roll bands.

They really hadn't found their stride yet. Some Girls is somehow ranked lower than this, even though Some Girls is great and Aftermath is a bit clunky sounding, even for 1966. This is also ranked above Freak Out! in the year, which is also a travesty.

I am not a big fan of this album, sure they are four good songs on it but the rest are very average. I would be inclined to agree with the view that their best albums where from Beggars Banquet to Some Girls.

Your feedback for Aftermath