Revolver (studio album) by The Beatles

Revolver is ranked 2nd best out of 66 albums by The Beatles on BestEverAlbums.com.

The best album by The Beatles is Abbey Road which is ranked number 3 in the list of all-time albums with a total rank score of 75,574. 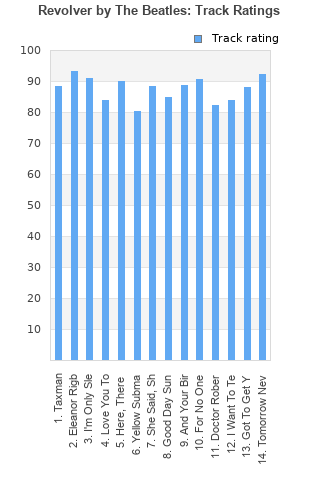 Rating metrics: Outliers can be removed when calculating a mean average to dampen the effects of ratings outside the normal distribution. This figure is provided as the trimmed mean. A high standard deviation can be legitimate, but can sometimes indicate 'gaming' is occurring. Consider a simplified example* of an item receiving ratings of 100, 50, & 0. The mean average rating would be 50. However, ratings of 55, 50 & 45 could also result in the same average. The second average might be more trusted because there is more consensus around a particular rating (a lower deviation).
(*In practice, some albums can have several thousand ratings)
This album is rated in the top 1% of all albums on BestEverAlbums.com. This album has a Bayesian average rating of 91.3/100, a mean average of 90.0/100, and a trimmed mean (excluding outliers) of 91.3/100. The standard deviation for this album is 13.8.

The album where things start to get really interesting. From the infinitely infectious Taxman through to the studio bending 'Tomorrow Never Knows', the album is a journey through the creative odyssey of what is truly possible within four walls and a mixing desk.

third best Beatles record for me

Contains a lot of good songs, and much experimenting as well. I Really like "And your bird can sing", and also the classics such as "Tomorrow never knows", "Eleanor Rigby", "Yellow Submarine" and "Got to get you into my life". The album really grew on me aswell, after many listens. Not perfect, but almost. 95/100

Contains some great music - Eleanor Rigby, Tomorrow Never Knows, And Your Bird Can Sing and my personal favourite She Said She Said, but not all that fussed about it overall.

First Beatles record that is great throughout the whole album and probably their best. There is not a one bad track on here. Fav tracks: Taxman, Eleanor Rigby, She Said She Said, Got To Get You Into My Life.

This album is basically a perfect record. My one criticism which holds the record back for me is the one song Doctor Robert which is just a good song but not phenomenal like every other track. Despite this, this record is a masterpiece and deserves all the praise it gets. The sonic experimentation is jaw dropping and it stuns you for the full 35 minutes. The soundscape created makes a sort of bliss that transports you away and you just get completely lost in the music. The song writing is also fantastic with some of their best ever tracks present. No song over stays its welcome either and they are all 2 or 3 minutes of pop perfection. Instrumentally, the record is so varied and unique that it is tough to notice every one without listening to the album over and over again. Overall, a classic that only gets better with age and really demonstrates why the Beatles are the greatest band to ever create music.

In my opinion, this is the Beatles greatest work. It opened the door for so many things musically, not only for the them, but for a generation of musicians to come.

The Beatles were evolving, and this album was the output of that. Beautiful!

Your feedback for Revolver