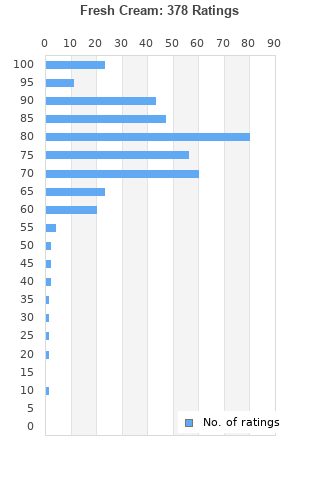 Fresh Cream is ranked 3rd best out of 15 albums by Cream on BestEverAlbums.com.

The best album by Cream is Disraeli Gears which is ranked number 263 in the list of all-time albums with a total rank score of 7,249. 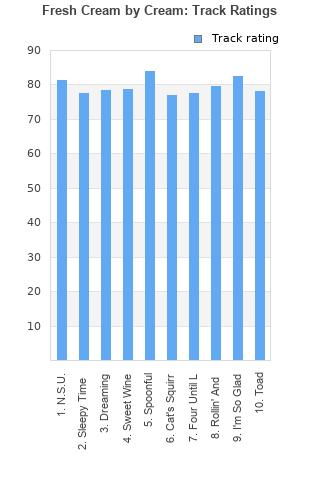 Rating metrics: Outliers can be removed when calculating a mean average to dampen the effects of ratings outside the normal distribution. This figure is provided as the trimmed mean. A high standard deviation can be legitimate, but can sometimes indicate 'gaming' is occurring. Consider a simplified example* of an item receiving ratings of 100, 50, & 0. The mean average rating would be 50. However, ratings of 55, 50 & 45 could also result in the same average. The second average might be more trusted because there is more consensus around a particular rating (a lower deviation).
(*In practice, some albums can have several thousand ratings)
This album is rated in the top 3% of all albums on BestEverAlbums.com. This album has a Bayesian average rating of 78.3/100, a mean average of 77.7/100, and a trimmed mean (excluding outliers) of 78.4/100. The standard deviation for this album is 12.8.

The US release is superior because “I Feel Free” is better than “Spoonful”. It serves as a great opener but my favorite is “N.S.U.”, which is on both releases. Most of the songs on the album are more or less jam sessions. Apart from the two that I already mentioned liking there aren’t really any “great” songs on here. “I’m So Glad” is actually a banger. There is a lack of quality songwriting but that’s not what the record is going for. It’s meant to show off the talents of the three members and it does that. All three members impress throughout. Baker’s drumming is most impressive because of how much of the album it commands. It’s the driving force behind nearly every song. Clapton’s guitar work is great as always. Nothing spectacular but completely solid. Bruce’s vocals are powerful and crisp but I couldn’t hear much of the bass except on “Toad”. It sounds great on that song. The drum solo is cool, too. I listened to the stereo version available on Spotify and it’s not a very good mix. The vocals are way too high and the guitars are weirdly placed. I would imagine that it sounds better in mono. Headphones magnify the problem, playing it out loud sounds much better. I’d also imagine these guys out in an incredible concert.

Solid debut,but they would definitely get better.

It’s good blues rock, but nothing really special. The early hard rock and heavy metal sounds on Disraeli Gears are nowhere to find here yet.

A youthful album with all its risks and imperfections. It's not a great but very spontaneous which makes it for an enjoyable listening.
Ginger Baker was already great!

Pure blues-rock, from the fisrt supergroup of rock. Every instrument here is played masterfully.

There are different versions of this album. The above tracklisting is the UK release.

Your feedback for Fresh Cream