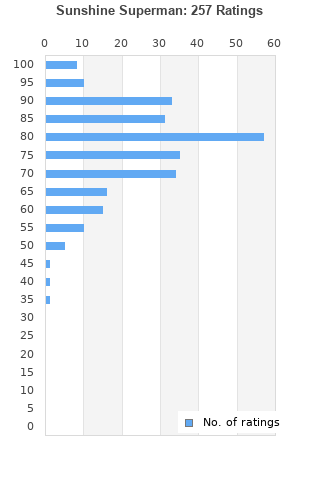 Sunshine Superman is ranked as the best album by Donovan. 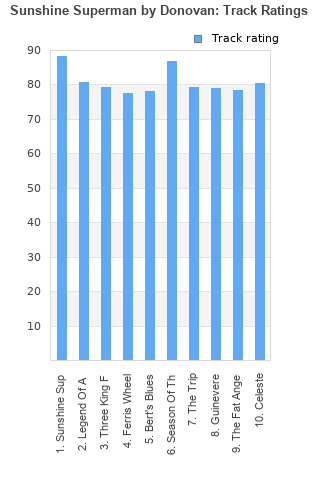 Season Of The Witch
Rating: 87 (82 votes)Comments:

Rating metrics: Outliers can be removed when calculating a mean average to dampen the effects of ratings outside the normal distribution. This figure is provided as the trimmed mean. A high standard deviation can be legitimate, but can sometimes indicate 'gaming' is occurring. Consider a simplified example* of an item receiving ratings of 100, 50, & 0. The mean average rating would be 50. However, ratings of 55, 50 & 45 could also result in the same average. The second average might be more trusted because there is more consensus around a particular rating (a lower deviation).
(*In practice, some albums can have several thousand ratings)
This album is rated in the top 4% of all albums on BestEverAlbums.com. This album has a Bayesian average rating of 77.4/100, a mean average of 77.2/100, and a trimmed mean (excluding outliers) of 77.6/100. The standard deviation for this album is 11.8.

My release varies significantly from the version featured on BEA. At the time of it's original release there was a label dispute between Donovan's US label and Donovan's UK Label. Donovan's UK label, Pye Records, released the version I have on hand in 1967 and called it "Sunshine Superman", however, Pye Records combined portions of two US releases - the "Sunshine Superman" LP and the "Mellow Yellow" LP to form the track list of Pye Records (Cat#: Pye NPL 18181) (or re-released in 1990 as BGOCD68).
The Track List for Pye NPL 18181:
01) Sunshine Superman
02) Legend Of A Girl Child Linda
03) The Observation
04) Guinevere
05) Celeste
06) Writer In The Sun
07) Season Of The Witch
08) Hampstead Incident
09) Sand And Foam
10) Young Girl Blues
11) Three Kingfishers
12) Bert's Blues

addition to my comment: Bert's Blues and Guinevere are really good songs too I forgot

it's strange how this album isnt anywhere near the top 5 of 1966 where it should stand, probably the most innovative rock album of 1966, even moreso than the Beatles or the Mothers Of Invention,
nobody did psych rock to the degree that Sunshine Superman did that year

A really cool, really versatile, really great album from a Donovan. “Sunshine Superman”, “Ferris Wheel”, “The Trip” and “The Fat Angel” are fantastic psychedelic rock. “Bert’s Blues” is dynamic and groovy. “Season of the Witch” is great rock. I like the rhythm of “Celeste” and the instrumental break. Donovan’s voice, songwriting and guitar work is superb on this album. “The Legend fo Girl Child Linda” is a little silly for me.

A really cool, really versatile, really great album from a Donovan. “Sunshine Superman”, “Ferris Wheel”, “The Trip” and “The Fat Angel” are fantastic psychedelic rock. “Bert’s Blues” is dynamic and groovy. “Season of the Witch” is great rock. Donovan’s voice, songwriting and guitar work is superb on this album. The inclusion of a sitar across the album is a nice touch. “The Legend fo Girl Child Linda” is a silly for me.

A true beauty of a psychedelic album, showcasing plenty of sitar and even classical elements like on 'Legend of a Girl Called Linda'. 'Season of the Witch' is a true psychedelic classic, often referred to as one of one of the most highly regarded psychedelic classics of the sixties. I particularly like the use of sitar and tabla on tracks like '3 King Fishers' which reminds me of the Beatles 'Norwegian Wood'. A Classic album from start to finish.

Your feedback for Sunshine Superman