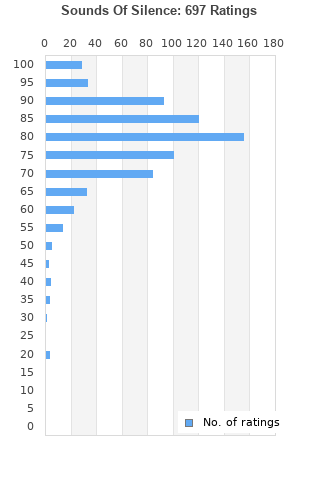 Sounds Of Silence is ranked 3rd best out of 19 albums by Simon & Garfunkel on BestEverAlbums.com.

The best album by Simon & Garfunkel is Bridge Over Troubled Water which is ranked number 113 in the list of all-time albums with a total rank score of 14,029. 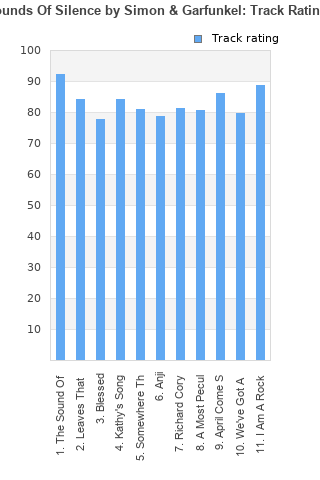 Rating metrics: Outliers can be removed when calculating a mean average to dampen the effects of ratings outside the normal distribution. This figure is provided as the trimmed mean. A high standard deviation can be legitimate, but can sometimes indicate 'gaming' is occurring. Consider a simplified example* of an item receiving ratings of 100, 50, & 0. The mean average rating would be 50. However, ratings of 55, 50 & 45 could also result in the same average. The second average might be more trusted because there is more consensus around a particular rating (a lower deviation).
(*In practice, some albums can have several thousand ratings)
This album is rated in the top 2% of all albums on BestEverAlbums.com. This album has a Bayesian average rating of 79.5/100, a mean average of 78.9/100, and a trimmed mean (excluding outliers) of 79.6/100. The standard deviation for this album is 11.9.

With three classic songs, this is a classic..

A couple of great tracks make this album so good and also on this one there is an electric version of The Sound Of Silence and I prefer this one over the acoustic.

A decent listen with some standout tracks that make the album very enjoyable.

A really great album by S&G, and one of my personal favourites from their catalogue. Aside from the iconic 'Sounds of Silence', some gems here include 'Kathy's Song', 'A Most Peculiar Man' and 'April Come She Will'.

Better than Parsley, Sage, Rosemary and Thyme, but only by a little bit. There's a lot more highlights on this one; the opening track and the last five songs.

This is a good collection of songs. The songwriting is very impressive but there isn't much diversity amongst the songs themselves. "Anji" is an oft-repeated cover that also serves as the backing for "Somewhere They Can't Find Me". I don't see the point of including both songs, especially back to back. Then there are two songs back to back about suicide. The arrangement of the album is lacking to me. I really like "The Sound of Silence". The electric sound is perfect for it. “Somewhere They Can’t Find Me” sounds like Elliott Smith.

Really good album, even better than their previous effort Parsley Sage Rosemary and Thyme. Sound of Silence and I Am A Rock are the obvious standouts, but Blessed is also really good as well. Highly recommended.

This was such a change from Wednesday Morning 3 AM, though both albums are about equally my favourite S&G albums. So the first album has a number of cover songs and a lot of optimism, balanced with pessimism. In place of gospels, Sounds of Silence has the cynical, sarcastic "Blessed", two of the songs tell of suicide and overall it would seem quite negative, but looking at it another way, it shows sympathy for lonely people. I particularly like "A Most Peculiar Man" and that key melody really goes well with the subject matter.

Your feedback for Sounds Of Silence