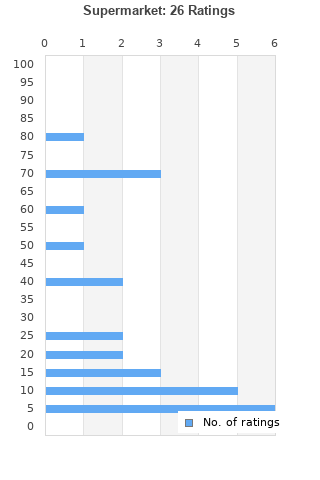 Logic - Super Market Mixtape CD Supermarket
Condition: Brand New
Time left: 18d 12h 50m 42s
Ships to: Worldwide
$7.97
Go to store
Product prices and availability are accurate as of the date indicated and are subject to change. Any price and availability information displayed on the linked website at the time of purchase will apply to the purchase of this product.  See full search results on eBay

Supermarket is ranked 11th best out of 11 albums by Logic on BestEverAlbums.com.

The best album by Logic is Under Pressure which is ranked number 4981 in the list of all-time albums with a total rank score of 265. 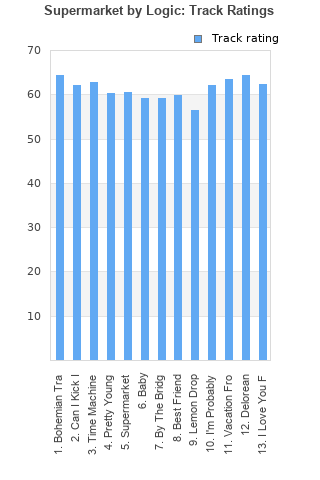 Rating metrics: Outliers can be removed when calculating a mean average to dampen the effects of ratings outside the normal distribution. This figure is provided as the trimmed mean. A high standard deviation can be legitimate, but can sometimes indicate 'gaming' is occurring. Consider a simplified example* of an item receiving ratings of 100, 50, & 0. The mean average rating would be 50. However, ratings of 55, 50 & 45 could also result in the same average. The second average might be more trusted because there is more consensus around a particular rating (a lower deviation).
(*In practice, some albums can have several thousand ratings)
This album has a Bayesian average rating of 39.3/100, a mean average of 24.6/100, and a trimmed mean (excluding outliers) of 24.6/100. The standard deviation for this album is 22.6.

Boring, boring, boring. Nothing special. It ain't bad but it ain't good. As a soundtrack this would be ideal for a teen love movie. Haven't read his novel. Never will. I like logic, but not this. Only track I really liked was bohemian trapsody.

Logic has released his first novel. Called Supermarket, this book would be a psychological thriller based on the story of Flynn, a supermarket employee. And Logic had the VERY BAD idea to accompany his book with an album. The question that arises is: Why Logic wanted to release an album from Mac DeMarco? I do not know ... but in any case it's bad, very bad.

Your feedback for Supermarket