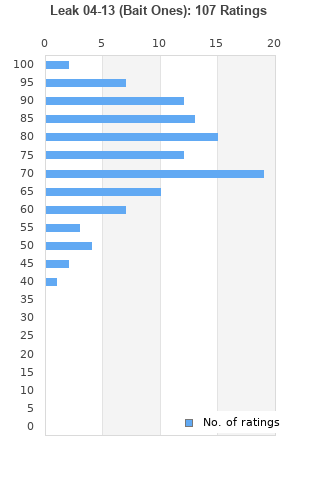 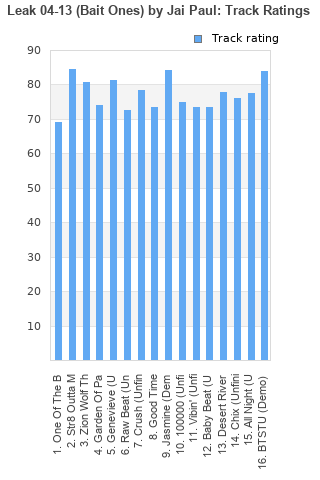 Rating metrics: Outliers can be removed when calculating a mean average to dampen the effects of ratings outside the normal distribution. This figure is provided as the trimmed mean. A high standard deviation can be legitimate, but can sometimes indicate 'gaming' is occurring. Consider a simplified example* of an item receiving ratings of 100, 50, & 0. The mean average rating would be 50. However, ratings of 55, 50 & 45 could also result in the same average. The second average might be more trusted because there is more consensus around a particular rating (a lower deviation).
(*In practice, some albums can have several thousand ratings)
This album is rated in the top 17% of all albums on BestEverAlbums.com. This album has a Bayesian average rating of 74.8/100, a mean average of 75.0/100, and a trimmed mean (excluding outliers) of 75.0/100. The standard deviation for this album is 12.9.

Interesting and entertaining production with smooth vocals on top. A very cohesive record.

Jai Raj Paul appeared on MySpace in 2007 but became famous in 2010, with a contract with XL Recordings. Then there was the leak that changed everything: on Bandcamp, a collection of songs by Jai, the press is excited and announces the release of a long-awaited debut album. In 2019, after seven years, this is the comeback of Jai with the officialy released leak . The choice is really curious, no final version of the work has been published. This leak probably ruined Jai Paul's career or at least thwarted his progress. But behind all that, there is a music: chaotic, inconclusive, but also resolutely brilliant, wonderfully intercultural and inexorably alive. The unfinished beauty of this album, this work in progress requires you to think: if the leak had never occurred ? Would we have the beginnings of a new Prince ? But nothing is more contemporary, current, alive than this unfinished music with an approximate sound mix. A lo-fi that looks like the most sophisticated r'n'b. This is a record revealing very creative ideas, futuristic music, androgynous pop art, intelligent electropop, raw synth-funk.

He has a cool story and it's cool to learn how influential he was, but I feel like I'm missing something here

Jai Paul's back, and Jai Paul wants what's his.