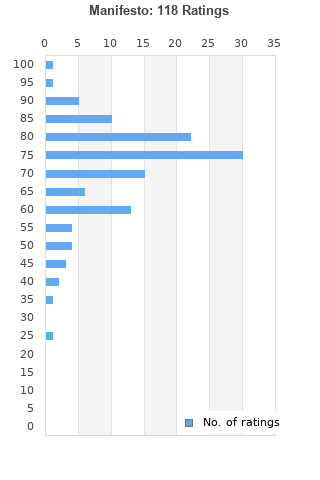 Manifesto is ranked 8th best out of 17 albums by Roxy Music on BestEverAlbums.com.

The best album by Roxy Music is For Your Pleasure which is ranked number 467 in the list of all-time albums with a total rank score of 4,044. 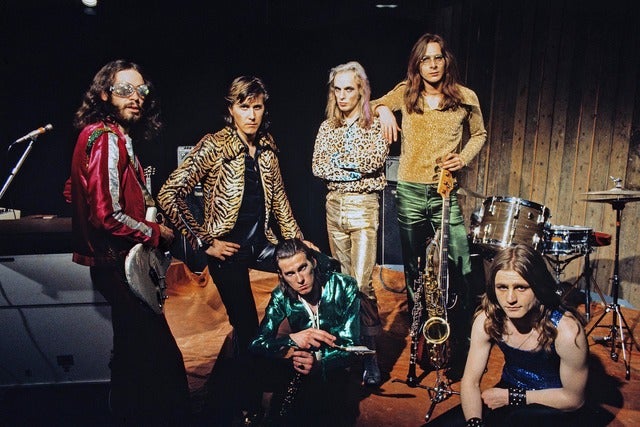 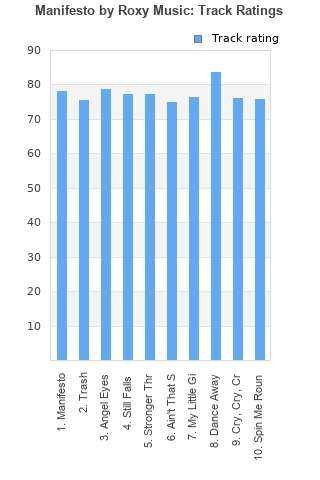 Rating metrics: Outliers can be removed when calculating a mean average to dampen the effects of ratings outside the normal distribution. This figure is provided as the trimmed mean. A high standard deviation can be legitimate, but can sometimes indicate 'gaming' is occurring. Consider a simplified example* of an item receiving ratings of 100, 50, & 0. The mean average rating would be 50. However, ratings of 55, 50 & 45 could also result in the same average. The second average might be more trusted because there is more consensus around a particular rating (a lower deviation).
(*In practice, some albums can have several thousand ratings)
This album has a Bayesian average rating of 71.9/100, a mean average of 71.3/100, and a trimmed mean (excluding outliers) of 71.8/100. The standard deviation for this album is 12.9.

If you only like early Roxy (Siren and before) then chances are you will slay this record. If you like Roxy of the 80's (Flesh+Blood, Avalon) then you will likely enjoy this one too. If like me, you enjoy all the evolution of Roxy Music (and as individuals, Eno, Ferry, Manzanera) then you will realise this is also a great, fun, listenable album (well produced and engineered). Many songs danceable, some great solos and sound blends, bass hooks and typical Ferry angst vocals. Perhaps overlooked a lot, only as the Roxy Music albums are all so strong.

The best way to come back. Very provocative. Reading Vogue was one of the most exciting things around 1979 and the left being pretentious to Eno who had been choosing this path recently. But their new cold sensitivity was a sound unheard before.

This is the first disappointing Roxy Music album. Manifesto, came three years after, siren, and gone is the quirky avant-garde art rock sound, and replaced with a more slick r'n'b pop sheen. Trash, is a good song, and, dance away, is a lovely pop song, albeit nothing Roxy would have done on earlier albums, but the rest is all a bit dull and safe. This really should have been a Bryan Ferry solo album, Roxy should have called it a day after, siren, but having said that we would then miss out on, avalon.

One of my least favorite Roxy Music records. It's got way to much of everything, the songs are not well crafted and the production is downright awful. A once great band on their inevitable down hill slide.

Your feedback for Manifesto