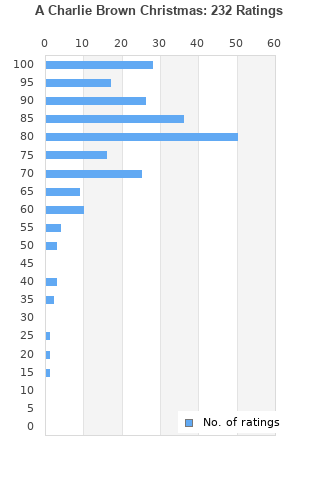 A Charlie Brown Christmas is ranked as the best album by Vince Guaraldi. 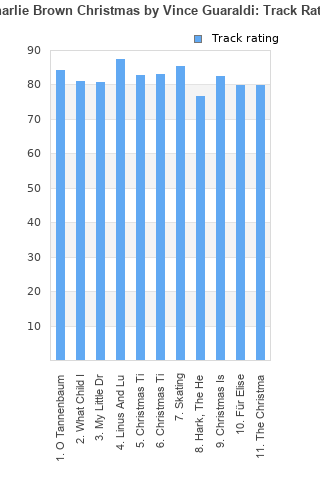 Rating metrics: Outliers can be removed when calculating a mean average to dampen the effects of ratings outside the normal distribution. This figure is provided as the trimmed mean. A high standard deviation can be legitimate, but can sometimes indicate 'gaming' is occurring. Consider a simplified example* of an item receiving ratings of 100, 50, & 0. The mean average rating would be 50. However, ratings of 55, 50 & 45 could also result in the same average. The second average might be more trusted because there is more consensus around a particular rating (a lower deviation).
(*In practice, some albums can have several thousand ratings)
This album is rated in the top 2% of all albums on BestEverAlbums.com. This album has a Bayesian average rating of 80.3/100, a mean average of 79.8/100, and a trimmed mean (excluding outliers) of 80.6/100. The standard deviation for this album is 15.3.

This one completely encompasses the feeling of being a kid at Christmas for me.

Christmas music has its fair share of detractors, and usually for good reason: the same few, tired old hits, trotted out year after year on the radio - it's enough to reduce the genre to little more than a joke. However... there are a few notable exceptions. Phil Spector's album is probably the best known, but this, often sultry little jazz affair (it's a soundtrack to the 1965 TV special of the same name), is another Christmas album worthy of your time. Cool, without ever slipping into slick, and nostlagic without ever becoming cloying, this is a great LP and features some excellent arrangements of Christmas classics (the real classics, not the pop tunes!). You might only listen to it for one month of the year, but it will beat anything on the radio.
High Points: My Little Drum; O Tannenbaum; Für Elise

This, along with a phil spector christmas, is the only christmas album that matters

Fantastic. The only xmas album I put on bar that low ep.

If this doesn't bring a smile to your face, I don't want to﻿ know you.

I really don't like the out of tune singing on "Hark, the Herald Angel Sings".

I think a lot of people either forget or don't qualify this album since its Christmas songs. It's unfortunate because this is honestly one of the best piano cds in existence. Skating is my favorite song. To be honest I can't stand christmas music, yet I can listen to this album any day of the year.

Your feedback for A Charlie Brown Christmas