Out Of Our Heads (studio album) by The Rolling Stones 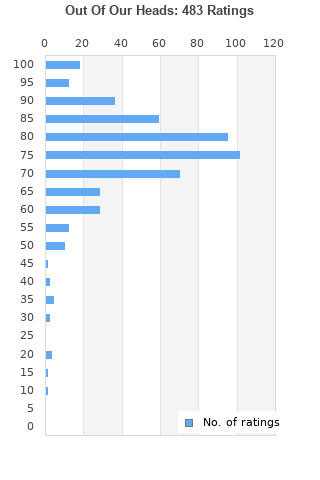 Out Of Our Heads is ranked 8th best out of 93 albums by The Rolling Stones on BestEverAlbums.com.

The best album by The Rolling Stones is Exile On Main St. which is ranked number 41 in the list of all-time albums with a total rank score of 28,047.

Rocks Off: A Tribute To The Rolling Stones
FITZGERALDS NIGHTCLUB, Berwyn, United States. 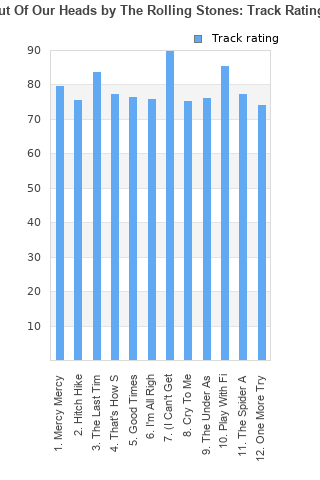 Out Of Our Heads rankings

Out Of Our Heads collection

Out Of Our Heads ratings

Rating metrics: Outliers can be removed when calculating a mean average to dampen the effects of ratings outside the normal distribution. This figure is provided as the trimmed mean. A high standard deviation can be legitimate, but can sometimes indicate 'gaming' is occurring. Consider a simplified example* of an item receiving ratings of 100, 50, & 0. The mean average rating would be 50. However, ratings of 55, 50 & 45 could also result in the same average. The second average might be more trusted because there is more consensus around a particular rating (a lower deviation).
(*In practice, some albums can have several thousand ratings)
This album is rated in the top 6% of all albums on BestEverAlbums.com. This album has a Bayesian average rating of 76.5/100, a mean average of 75.4/100, and a trimmed mean (excluding outliers) of 76.6/100. The standard deviation for this album is 13.5.

Out Of Our Heads favourites

Out Of Our Heads comments

Easily the best early Stones album. Some great covers of artists like Sam Cooke and Roosevelt Jamison along with Mick and Keith's songwriting getting noticeably better. Great tracklisting, not a single song I don't like and Mick's vocals are stellar. High recommendations for anybody newer to the Stones.

This is the U.S. version, hitman. It's the UK version that isn't on the site...for some reason.

The US version is better.

The best rolling stone album. The boys pretty much sank with sticky finger. This sounds as fresh as when I first gave it a listen in '65.

The first great Stones album sees them covering mostly soul numbers from the early 60's and making them their own. Their 4th best album of the sixties behind Banquet, Let It Bleed & Aftermath. I only have British version but I don't think it suffers next to the U.S. version, as a whole it is a smoother album and more cohesive. Heart Of Stone a Jagger/Richards original points the direction in which they were heading.

This is the Stones evolving into their "bad boy" personas. When they embrace this ethic fully, it works great. The covers and transitional numbers come off as filler.

Your feedback for Out Of Our Heads