Help! (soundtrack album) by The Beatles 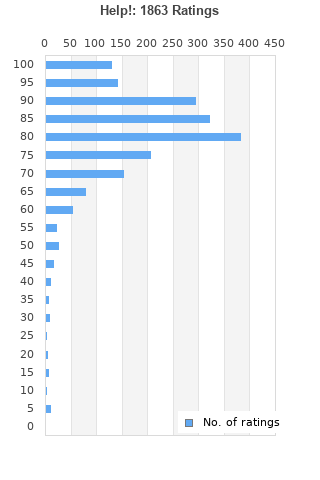 Help! is ranked 8th best out of 66 albums by The Beatles on BestEverAlbums.com.

The best album by The Beatles is Abbey Road which is ranked number 3 in the list of all-time albums with a total rank score of 72,677. 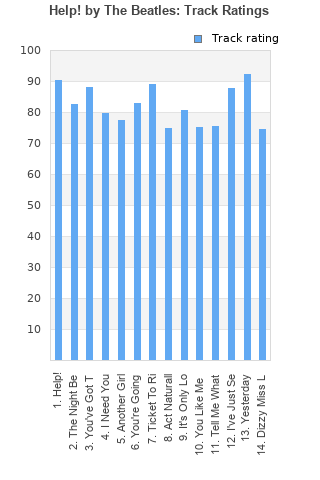 Rating metrics: Outliers can be removed when calculating a mean average to dampen the effects of ratings outside the normal distribution. This figure is provided as the trimmed mean. A high standard deviation can be legitimate, but can sometimes indicate 'gaming' is occurring. Consider a simplified example* of an item receiving ratings of 100, 50, & 0. The mean average rating would be 50. However, ratings of 55, 50 & 45 could also result in the same average. The second average might be more trusted because there is more consensus around a particular rating (a lower deviation).
(*In practice, some albums can have several thousand ratings)
This album is rated in the top 1% of all albums on BestEverAlbums.com. This album has a Bayesian average rating of 81.2/100, a mean average of 80.0/100, and a trimmed mean (excluding outliers) of 81.2/100. The standard deviation for this album is 14.5.

Best Songs: Help, The Night Before, I Need You, Ticket to Ride, I've Just Seen a Face, and Yesterday.

Second best Beatles album from pre-Rubber Soul era. Help, Yesterday, Ticket To Ride, The Night Before are the best ones and there are few more good tracks, but there is a couple of filler ones too.

This album is, for me, WAY above their other very early material, and features one of the greatest tracks of all time in Yesterday.

I like it better than rubber soul. I know that is weird to a lot of people. I have been a Beatles fan for decades and listened to these albums hundreds of times. Help! just does it. It's quite possibly the only underrated Beatles album.

Most nostalgia on this album than from any other Beatles album

The covers were the least interesting tracks at this point. The songwriting is now great, for their first really great record.

This album's high points are amazing, but at other points not so much. This opened the door for the masterpiece that is Rubber Soul.

The album that has Yesterday. That's a good enough reason to listen to it.

A few of my favorite Beatles tracks are on this album, but it's still a step back from Hard Day's Night overall.

Your feedback for Help!