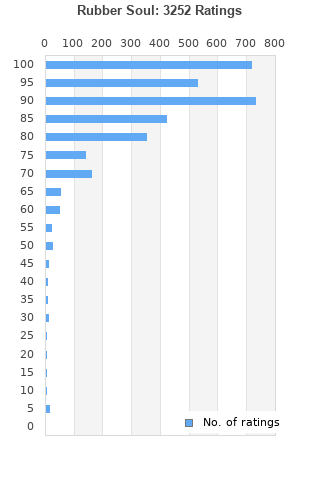 Rubber Soul is ranked 5th best out of 66 albums by The Beatles on BestEverAlbums.com.

The best album by The Beatles is Abbey Road which is ranked number 3 in the list of all-time albums with a total rank score of 75,574. 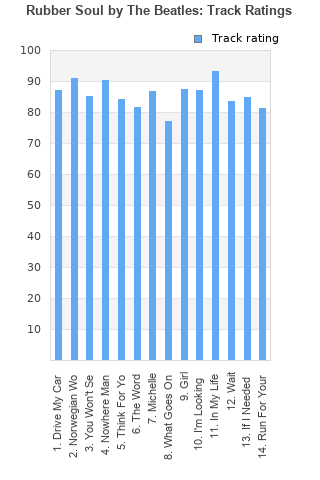 Rating metrics: Outliers can be removed when calculating a mean average to dampen the effects of ratings outside the normal distribution. This figure is provided as the trimmed mean. A high standard deviation can be legitimate, but can sometimes indicate 'gaming' is occurring. Consider a simplified example* of an item receiving ratings of 100, 50, & 0. The mean average rating would be 50. However, ratings of 55, 50 & 45 could also result in the same average. The second average might be more trusted because there is more consensus around a particular rating (a lower deviation).
(*In practice, some albums can have several thousand ratings)
This album is rated in the top 1% of all albums on BestEverAlbums.com. This album has a Bayesian average rating of 88.2/100, a mean average of 87.1/100, and a trimmed mean (excluding outliers) of 88.3/100. The standard deviation for this album is 13.7.

After revisiting this album my opinion did not change too much, but I like Michelle and the most annoying song for me is What Goes On and sniffing in Girl. Still this album has great atmosphere and a lot of great Beatles tracks.

The sliding doors moment. Feeling incredibly familiar but feels like a gigantic step forward from the Beatlemania era of albums that preceded it. It is here where we get the foundations for the guitar music we know and love today. Era defining masterpiece.

This is the landmark in The Beatles catalogue. There are some incredibly great tracks Nowhere Man, Norwegian Wood, In My Life, but there are also ones I don't like: Girl, Michelle.

Most consistent, raw, best harmonies, best everything. Cannot believe this is 56 years old. Not one weak track on here in my opinion. My favorite Beatles record as well as my favorite record.

The real deal for the beatles, help and a hard days night are very good, but this is just excellent, Lenoon have the best songs in here, Paul is excellent, george helps and deliver songs and ringo drums are precise

From rubber soul to abbey road, thats the best album run for any artist

This was the "real" beginning for the Beatles. You can begin to see the freedom that Lennon and McCartney have in their songwriting, and the musicality of the band is starting to open up. Definitely not an album to be slept on.

Your feedback for Rubber Soul