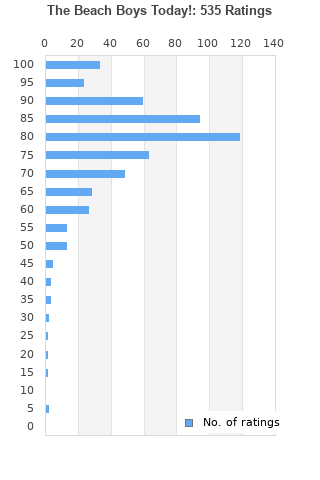 The Beach Boys Today
Condition: Used
Time left: 5h 44m 33s
Ships to: Worldwide
$4.99
Go to store
Product prices and availability are accurate as of the date indicated and are subject to change. Any price and availability information displayed on the linked website at the time of purchase will apply to the purchase of this product.  See full search results on eBay

The best album by The Beach Boys is Pet Sounds which is ranked number 12 in the list of all-time albums with a total rank score of 53,386.

The Beach Boys
Sandler Center For The Performing A, Virginia Beach, United States. 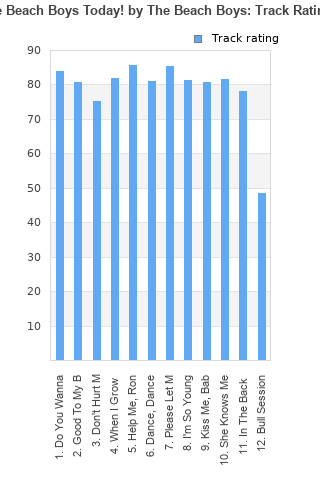 Rating metrics: Outliers can be removed when calculating a mean average to dampen the effects of ratings outside the normal distribution. This figure is provided as the trimmed mean. A high standard deviation can be legitimate, but can sometimes indicate 'gaming' is occurring. Consider a simplified example* of an item receiving ratings of 100, 50, & 0. The mean average rating would be 50. However, ratings of 55, 50 & 45 could also result in the same average. The second average might be more trusted because there is more consensus around a particular rating (a lower deviation).
(*In practice, some albums can have several thousand ratings)
This album is rated in the top 3% of all albums on BestEverAlbums.com. This album has a Bayesian average rating of 78.5/100, a mean average of 77.8/100, and a trimmed mean (excluding outliers) of 78.6/100. The standard deviation for this album is 14.4.

You can really hear the Phil Spector influence coming in on this one, in a good way. I really like this album.

My favorite of the Beach Boys that I have heard so far. Good conventional pop music, rather than the pretentious failed experiments that I think characterize their later work.

Some likable songs and emerging signs of genius, but the sequence is divided between upbeat tunes and ballads in a way that makes it hard for me to enjoy as an album proper.

One of the Beach Boys most interesting albums. It is the transition album between The Beach Boys as a surf novelty act and The Beach Boys that would make "higher art" albums in the late 60s and early 70s. Even the album itself is neatly split between catchy pop songs (side 1) and longer ballads (side 2). Side 2 sounds like the rough draft for Pet Sounds as it is clear that Brian Wilson is beginning to hone his craft as both a song writer and producer. A great place to start if you want to make a run through The Beach Boys best era.

The first pop music masterpiece - a perfect album start to end (last track aside), nine months before Rubber Soul. An excellent demonstration of Brian Wilson’s genius (he was just 22 when this album was released!)

Best tracks: Dance Dance Dance, Please Let Me Wonder
Worst tracks: Good to My Baby, Don't Hurt My Little Sister, In the Back of My Mind

This is where The Beach Boys went from a singles band to an album band, and they are in rare form. Of course, just a year later they would put out Pet Sounds, their masterpiece, but The Beach Boys Today! serves as a good prerequisite for Pet Sounds.

Brian Wilson begins here to show his true potential as a songwriter, a beatiful record that set the tone to Pet Sounds. "Please Let me Wonder" is among their best tracks for sure.

Your feedback for The Beach Boys Today!