Bringing It All Back Home (studio album) by Bob Dylan 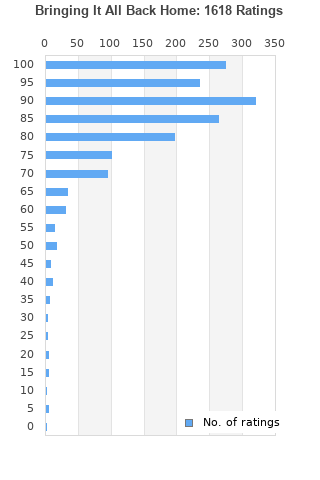 Bringing It All Back Home is ranked 4th best out of 74 albums by Bob Dylan on BestEverAlbums.com.

The best album by Bob Dylan is Highway 61 Revisited which is ranked number 26 in the list of all-time albums with a total rank score of 35,895.

Listen to Bringing It All Back Home on YouTube 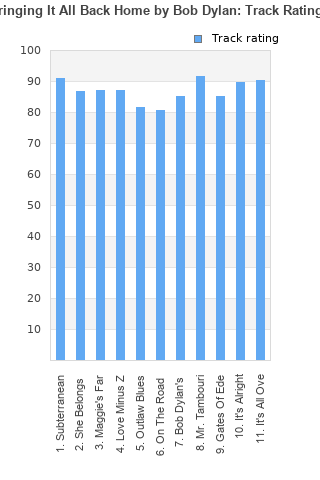 Bringing It All Back Home rankings

Bringing It All Back Home collection

Bringing It All Back Home ratings

Rating metrics: Outliers can be removed when calculating a mean average to dampen the effects of ratings outside the normal distribution. This figure is provided as the trimmed mean. A high standard deviation can be legitimate, but can sometimes indicate 'gaming' is occurring. Consider a simplified example* of an item receiving ratings of 100, 50, & 0. The mean average rating would be 50. However, ratings of 55, 50 & 45 could also result in the same average. The second average might be more trusted because there is more consensus around a particular rating (a lower deviation).
(*In practice, some albums can have several thousand ratings)
This album is rated in the top 1% of all albums on BestEverAlbums.com. This album has a Bayesian average rating of 86.2/100, a mean average of 84.9/100, and a trimmed mean (excluding outliers) of 86.3/100. The standard deviation for this album is 14.5.

Bringing It All Back Home favourites

Bringing It All Back Home comments

Mr. Tambourine Man is his best song, and the album holds up pretty consistantly the whole way through

The album that started the changing of the tides from folk-star to folk rock-star. The start of the best period of his career has highlights right across the album and while the sound has changed, the way he tells stories through song has only strengthened.

I really love that album, this is the one that after I heard I changed my opinion on Dylan. Mr. Tambourine Man, It's Alright Ma and Maggie's Farm are ones of the best ever made. And then there is an incredible Subterrenean Homesick Blues that I love.

So I KNOW that I should love Dylan's movement into electric sounds... but it doesn't speak to me the same way as his more analog and acoustic music.

The transition album from folk to electric Dylan. Altho I like electric Dylan as a whole better, the more 'folk' side of this album makes it into the amazing album it is. Mr. Tambourine Man, It's Alright Ma and It's All Over are three of the finest songs Dylan ever wrote.

Rating this below 100 is an acknowledgement that the electric side is a hair weaker than the unassailable acoustic side two.

One of the first Dylan records I ever owned, and the album that immersed my musical curiosity into his work. 'She Belongs to Me', 'Love Minus Zero/No Limit' and 'It's All Over Now, Baby Blue' are some of my favorites here. A really fantastic record by an equally fantastic poet.

Your feedback for Bringing It All Back Home