Smiling With No Teeth (studio album) by Genesis Owusu 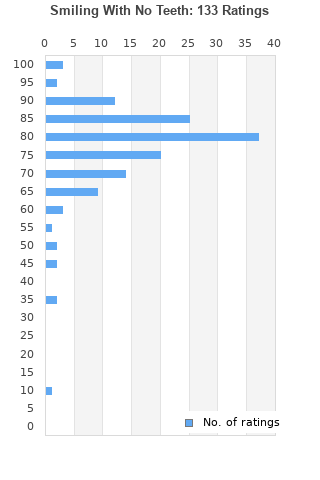 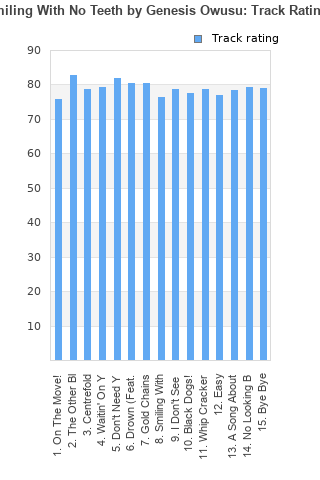 Smiling With No Teeth rankings

Smiling With No Teeth collection

Smiling With No Teeth ratings

Rating metrics: Outliers can be removed when calculating a mean average to dampen the effects of ratings outside the normal distribution. This figure is provided as the trimmed mean. A high standard deviation can be legitimate, but can sometimes indicate 'gaming' is occurring. Consider a simplified example* of an item receiving ratings of 100, 50, & 0. The mean average rating would be 50. However, ratings of 55, 50 & 45 could also result in the same average. The second average might be more trusted because there is more consensus around a particular rating (a lower deviation).
(*In practice, some albums can have several thousand ratings)
This album is rated in the top 3% of all albums on BestEverAlbums.com. This album has a Bayesian average rating of 77.6/100, a mean average of 76.8/100, and a trimmed mean (excluding outliers) of 78.0/100. The standard deviation for this album is 12.8.

Smiling With No Teeth favourites

Smiling With No Teeth comments

“Smiling With No Teeth” is a musical chameleon. The songs alternate between funk, R&B, and even more electronic sounds. Genesis Owusu’s voice impressively adjusts with each sound. At times, he sounds like Mc Ride and at others D’angelo. The themes of depression and anxiety are used extremely effectively throughout the album. Owusu uses the imagery of the black dog as a clever thematic shorthand and peppers it into the tracks. More negatively, The B side switches to a quieter sound and a broader less personal themes. There are certainly highlights like “Easy”, but this side feels less integrated with the album over all.

This guy has potential. Surely one of the best debut records of the year; his combination of hip hop, soul, funk, pop reminds me of lots of artirts of different genres like Kendrick, Death Grips (in the first track), Brockhampton but also Tame Impala and Ariel Pink. So impressive

An interesting album but it doesn't stick with me for some reason. High quality production and a good mix of a wide variety of sounds. It seems like some of the ideas are just surface level breakthroughs. As good as the instrumentation is I feel like a lot of the songs rely on the vocal performance which I think is lacking on a decent amount of the tracks. That being said, the only song that I don't really like is the Full House song.

quite an intriguing album. Owusu hits it off on the first song, and the first half includes some of my favorite songs of 2021. The second side is mundane, but the last song is incredible. Great album and i'm very excited to see where he goes from here.

Very fun and consistently interesting. Lots of great sounds and performances plus a couple of genuine god damn bops. It's been said in a couple comments already, but yeah, can't wait to see what comes next.

Highly promising debut album, there are some instances where he's given more than he can handle, but that's always a danger when going all out on diversity. His acrobatics moving so effortlessly across different styles are nothing short of spectacular. Anyone can find something appealing here. If I had to pick a standout moment, it would probably be No Looking Back, but this is an album that deserves multiple repeats and my opinion is subject to change at any given moment.

(This album is so rich! The number of standout moments and songs is amazing. Owusu's willingness to dabble in so many seemingly disparate sounds and styles to get his voice across is toweringly impressive. And this is a debut! If you like Neo-Soul, funk, somewhat experimental hip hop, and also like it when artists show some love to that synthy punk of Talking Heads, you shouldn't miss this!)

At this moment, 18 March 2021, 7 of my top 10 albums of 2021 are debut albums. To say I am excited about the emergence of so many brilliant and vibrant young artists and bands would be an understatement.

Unique among this new crop of artists I have fallen for, is Genesis Owusu. He is a Ghanaian Aussie who seems to have come, nearly full formed, to release this varied and wildly impressive debut. Lyrically, he is on point. There are some very biting moments of social commentary, some heartbreakingly direct lyrics about depression, some beautifully realized moments of overcoming these negatives to achieve self-respect, and many more well-written subjects. The rapping is good, the singing is subtle and passionate. Just on the vocals/lyrics side this is a winner. But that is not even half the story of what I personally love about this album thus far.

The music! Well, I won't do a big breakdown of each song. I will say that the standout tracks are the slinking and sensual funk of "Smiling With No Teeth", the exuberant hard-hitting dancy brilliance of the opener "On The Move!", the almost post-punk/funk punk of the second track as well "The Other Black Dog", the low key electrofunk meets Neo-soul of "Waitin' On You", the hard to classify but very touching "Don't Need You", the hard hitting hip hop track "Gold Chains", the manic somewhat post punk energy of "Black Dogs!", the Talking Heads-esque "Whip Cracker", the breezy and truly beautiful and life-affirming "A Song About Fishing", the out-of-this-world and nearly tearjerking closing 2 tracks "No Looking Back" and "Bye Bye". BUT really my song of the year so far may be the towering, disorienting, somewhat psychedelic, funky mastery of the truly astounding track "Centrefold." --- maybe you saw I named almost all songs. There are many moments within these songs that are distinctly great and the other songs, even if they don't reach the same heights, are also full of nice musical ideas and seemingly disparate musical styles being joined seamlessly.

As far as funky and incredibly creative and ambitious and yet never overly so debut albums go, it doesn't get much better than this. Easily one of my fave albums of the year and I can't explain how great my excitement is for his future albums. If this is any indicator, his music will continue to grow and somehow I feel like his best is yet to come.

This was a pleasant surprise! This new artist has huge potential. Truly exciting and catchy hip hop. He seems to have a fun personality.

Your feedback for Smiling With No Teeth