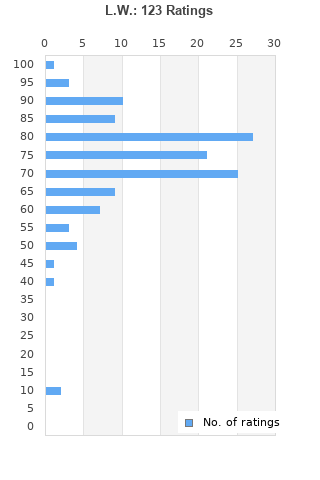 L.W. is ranked 13th best out of 30 albums by King Gizzard & The Lizard Wizard on BestEverAlbums.com.

The best album by King Gizzard & The Lizard Wizard is Nonagon Infinity which is ranked number 651 in the list of all-time albums with a total rank score of 2,856. 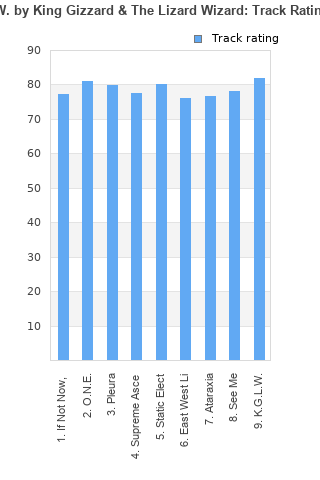 Rating metrics: Outliers can be removed when calculating a mean average to dampen the effects of ratings outside the normal distribution. This figure is provided as the trimmed mean. A high standard deviation can be legitimate, but can sometimes indicate 'gaming' is occurring. Consider a simplified example* of an item receiving ratings of 100, 50, & 0. The mean average rating would be 50. However, ratings of 55, 50 & 45 could also result in the same average. The second average might be more trusted because there is more consensus around a particular rating (a lower deviation).
(*In practice, some albums can have several thousand ratings)
This album is rated in the top 25% of all albums on BestEverAlbums.com. This album has a Bayesian average rating of 74.1/100, a mean average of 73.1/100, and a trimmed mean (excluding outliers) of 74.2/100. The standard deviation for this album is 13.7.

A worthy companion to KG. It's wild to me that they can make these quality albums so quickly, even if a lot of the ideas are shared with their previous release.

(On one hand this is just another King Gizzard album and the third in their series of albums exploring their brilliant microtonal experimentations, on the other hand more of a good to great thing is, well, good to great!)

I remember a few years back when Flying Microtonal Banana dropped King Gizzard had finally arrived on my radar. I listened to that album a lot and I really liked it. Almost before I could gather my thoughts on that album and well before I could start thinking "I wonder when KGLW will release another album" they had released another album and then another and then another and they just kept coming. And, ashamed to say, at some point along the line I lost interest. I had felt like they were releasing so much stuff that I just couldn't keep up.

Then earlier this year when L.W. dropped I kinda rolled my eyes and had zero interest in checking it out. Somehow I had completely forgotten what exactly I had loved about Flying Microtonal Banana. But this year is sort of a crazy music-listening year for me. I am listening to a lot of music from this year and why not include this album which many people are loving. So finally I listened and I am not disappointed. I am maybe a little disappointed by myself due to how I kinda wrote them off, but I digress.

This album is equal parts the most "classic" rock album I've dug this year and also is quite uniquely King Gizzard and the Lizard Wizard. As much as I feel at home listening to the killer grooves and solos and riffs and dope ass rock drumming etc, there is also the added excellent fact that this music is never fully classic rock. It has those weird psychedelic warps that make it unique but also those riffs and solos have that excellent and addictive tone and tuning that makes it feel almost middle eastern. It fucking rocks, this album, but also it is off kilter enough to keep me guessing and smiling.

I think KGLW may be the best rock band around at this moment. They have a sound all their own and an ability and willingness to experiement and try copious new things, they are fun and don't take themselves too seriously while also obviously having big ideas and brilliant minds musically. Also, this album is great yet almost feels effortless. Like they can just churn these baller rock albums out full of inspired hooks and songs and solos and mind melting psych parts without breaking a sweat. Kind of wild. Anyway, this album is really cool and has gotten me back on the King Giz hype train after years away.

King Gizz can do microtonal stuff for the rest of their career and I honestly wouldn't mind.

One of the best albums of the year so far.

Your feedback for L.W.