Entertainment, Death (studio album) by Spirit Of The Beehive 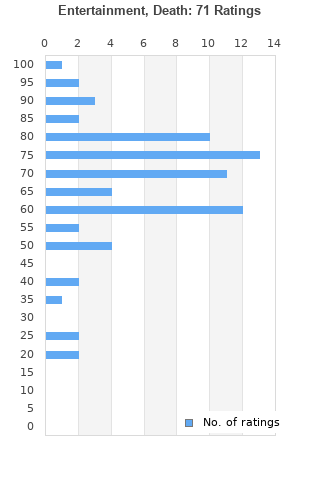 Spirit Of The Beehive bestography

Entertainment, Death is ranked as the best album by Spirit Of The Beehive. 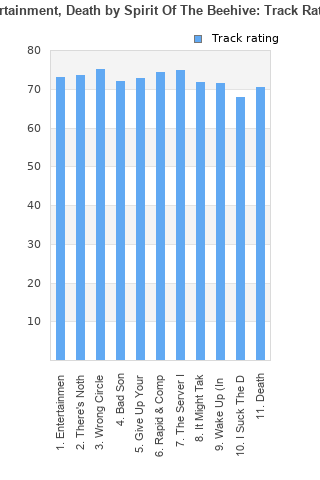 Rating metrics: Outliers can be removed when calculating a mean average to dampen the effects of ratings outside the normal distribution. This figure is provided as the trimmed mean. A high standard deviation can be legitimate, but can sometimes indicate 'gaming' is occurring. Consider a simplified example* of an item receiving ratings of 100, 50, & 0. The mean average rating would be 50. However, ratings of 55, 50 & 45 could also result in the same average. The second average might be more trusted because there is more consensus around a particular rating (a lower deviation).
(*In practice, some albums can have several thousand ratings)
This album has a Bayesian average rating of 70.1/100, a mean average of 68.1/100, and a trimmed mean (excluding outliers) of 69.6/100. The standard deviation for this album is 15.8.

I 'll keep this one as short as possible in order to avoid an excessively negative comment. Well, I don’t mean to sound too harsh, but this made me look up the definition of an album. “An album is a collection of songs”. Yeah, that’s what I thought as well. In that sense, this barely qualifies as an album. It has no songs – if there were any, I failed to spot them, sorry -, just random parts - that someday could become songs if they seriously worked on them - thrown together. It has no end and no beginning, it’s always moving without ever arriving anywhere, not to mention there is no flow, it feels like it restarts every one or two minutes. I read a review that said something along the lines of “well, not everything works, but at least it’s catchy”. I don’t hear it either to be honest, there weren’t many instances that I found particularly ear-pleasing. On the other hand, you can’t deny that it makes for a rather unique listening experience, so it’s one of those cases I believe everyone should give a try. This will possibly give you a headache -that’s what happened with me - but it could just as easily prove to be a wild and fascinating ride if you manage to pick up its vibe.

This album sounds so fresh I don't even comprehend it. Absolutely loving this band, they may be labeled "ahead of their time" in a couple decades, who knows. It's all over the place, it's got creative song structures, orgasmic production, some proper tension buildups and releases, sweet melodies... Amazing stuff.

(A bit of an odd album. When I hear it, it's as real and tangible as that pond on the desert's horizon. And when the album ends, its as gone as ... well, that damn pond. Anyway, shitty attempts at poetic metaphor aside, this is a strangely gauzy, smoky, ethereal album that flows effortlessly and then ends and leaves me feeling like I just had a beautiful dream but can't remember for the life of me what that dream entailed.)

This album is all over the fucking place. In a good way. The mix of dreamy pop soundscapes and experimental and jarring explosions just keeps me on my toes. The melodies and pop parts are pretty sick, the psychedelic bits are also consistently out of this world.

As happens with a lot of these types of surreal noise pop/neo-psychedelic albums, when ever I finish hearing this album I forget almost entirely every aspect of the album. Instead of clear ideas on what I justheard I tend to have a gauzy idea or conception of what the album was and how it flowed and what it was communicating. This is usually a bit of a downer, but in this case its mostly impressive. The way this albums sort of weaves these sounds in and out of each other and bridges disrelated elements with a sort of hazy smoke, the way the melodies are so sweet and bitter in the moment of listening and yet disappear as quickly as they go, its all quite impressive.

There are standout tracks and moments here, but I can't remember which even after 3 listens. The album flows so effortlessly track to track, each time I hear it I'm surprised when it ends, like "Wait, we just started! How can this be?!"

Overall, while this isn't on my Album of the Year shortlist personally, it does do things that no other album I've heard this year does better.

Your feedback for Entertainment, Death