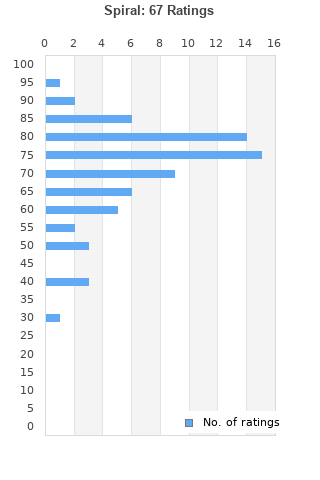 Spiral is ranked 2nd best out of 5 albums by Darkside on BestEverAlbums.com.

The best album by Darkside is Psychic which is ranked number 1014 in the list of all-time albums with a total rank score of 1,825. 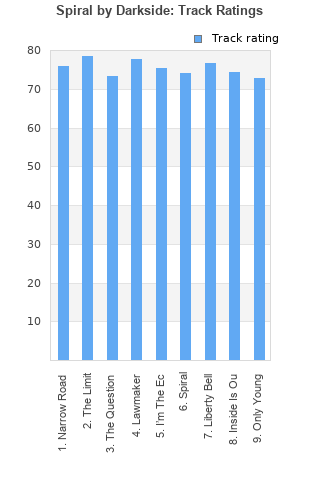 Rating metrics: Outliers can be removed when calculating a mean average to dampen the effects of ratings outside the normal distribution. This figure is provided as the trimmed mean. A high standard deviation can be legitimate, but can sometimes indicate 'gaming' is occurring. Consider a simplified example* of an item receiving ratings of 100, 50, & 0. The mean average rating would be 50. However, ratings of 55, 50 & 45 could also result in the same average. The second average might be more trusted because there is more consensus around a particular rating (a lower deviation).
(*In practice, some albums can have several thousand ratings)
This album has a Bayesian average rating of 72.8/100, a mean average of 72.2/100, and a trimmed mean (excluding outliers) of 72.8/100. The standard deviation for this album is 12.1.

Really happy that we have a second Darkside album. The strongest moments are when they go full groove.

I may need to give this more time, but right now, it's a bit underwhelming. And look, following up Psychic--an album whose greatness has only become clearer with time--was always going to be a daunting, if not insurmountable task. But setting aside how it stacks up to its predecessor, Spiral is an album lacking an ethos. It's stylistically in line with Darkside's previous work, with the same virtuosity and musical imagination that one might expect from the duo. Yet, it often feels directionless and uninterested in its own existence. Hopefully, I'll come around, because I very much want to like this record.

Your feedback for Spiral