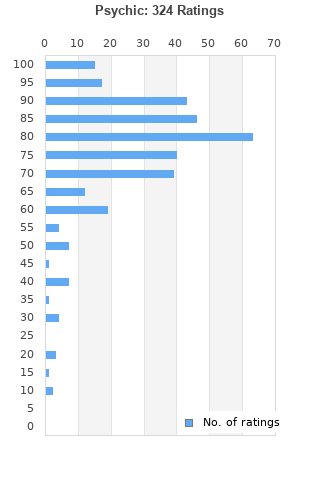 Psychic is ranked as the best album by Darkside. 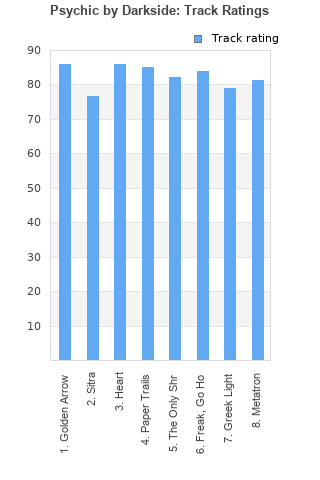 Rating metrics: Outliers can be removed when calculating a mean average to dampen the effects of ratings outside the normal distribution. This figure is provided as the trimmed mean. A high standard deviation can be legitimate, but can sometimes indicate 'gaming' is occurring. Consider a simplified example* of an item receiving ratings of 100, 50, & 0. The mean average rating would be 50. However, ratings of 55, 50 & 45 could also result in the same average. The second average might be more trusted because there is more consensus around a particular rating (a lower deviation).
(*In practice, some albums can have several thousand ratings)
This album is rated in the top 3% of all albums on BestEverAlbums.com. This album has a Bayesian average rating of 77.7/100, a mean average of 76.6/100, and a trimmed mean (excluding outliers) of 77.8/100. The standard deviation for this album is 15.9.

Such a chill and relaxing listen which is perfect for headphone users. That is how you get the best out of this record as it properly immerses you in the atmosphere which so easily takes you away from where you are. Also, it has some great tracks on here which are really under appreciated such as Golden Arrow. The beats are great on every track and so infectious that you find yourself bobbing your head along side them without even knowing you are doing so. Its uniqueness isn't mentioned enough as well as there isn't much similar to this and it really stands out. This is created by the vast array of instruments they use which allows us to explore deeper into the music. Overall, the record isn't outstanding and is a little way off but it is brilliant at creating an atmosphere and is well worth a listen.

I like this album, sure... But it gives me the weird impression that electronic music is always given more credit when directly aimed for rock sensibilities. There is much more to it than just that.

Oh yeah, this short-lived hype of not as trippy music as they hoped it would be, but rather relaxing... but rather boring. The type of “no one listens to our shit, but Pitchfork likes us” music that really makes me question Pitchfork’s cultural relevance to people who don’t just wanna be different. ‘Cause let’s be honest: you might like this if downtempo is your thing (and that’s fine), but no one in their right mind would think this duo has done or will do somwthing really groundbreaking.

Deserves it's place, really beautiful album.
2013 is a good year

Two years it flew under the radar for me.

How could I have been such a fool?

Wow. The music in this album is fantastic. I love how the majority of the songs blend into each other; it definitely is an album to be heard on vinyl. The vocal performances are sort of sub-par though, in my opinion.

Very cool album. Although the guy's voice sometimes bugs me a bit.

My opinion might change, but the more I listen to it the more I realize that it's just a good album and not a great record like most people say.
Golden Arrow, Greek Light and Metatron are such great tracks... it feels like the beginning and the ending of a great record, but what happens in between it's just pleasant.

Your feedback for Psychic