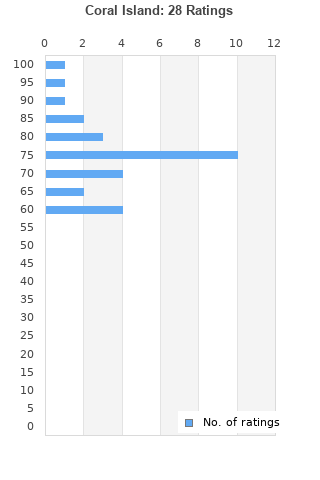 Bing Crosby - I'll Sing You A Song Of The Islands LP
Condition: Used
Time left: 1d 2h 18m 20s
Ships to: Worldwide
£2.99
Go to store
Product prices and availability are accurate as of the date indicated and are subject to change. Any price and availability information displayed on the linked website at the time of purchase will apply to the purchase of this product.  See full search results on eBay

Coral Island is ranked 7th best out of 12 albums by The Coral on BestEverAlbums.com.

The best album by The Coral is The Coral which is ranked number 4535 in the list of all-time albums with a total rank score of 298. 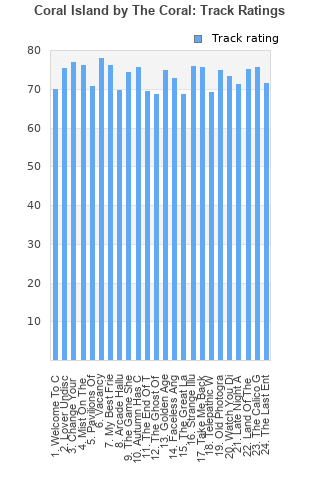 Rating metrics: Outliers can be removed when calculating a mean average to dampen the effects of ratings outside the normal distribution. This figure is provided as the trimmed mean. A high standard deviation can be legitimate, but can sometimes indicate 'gaming' is occurring. Consider a simplified example* of an item receiving ratings of 100, 50, & 0. The mean average rating would be 50. However, ratings of 55, 50 & 45 could also result in the same average. The second average might be more trusted because there is more consensus around a particular rating (a lower deviation).
(*In practice, some albums can have several thousand ratings)
This album has a Bayesian average rating of 71.6/100, a mean average of 70.6/100, and a trimmed mean (excluding outliers) of 70.6/100. The standard deviation for this album is 10.0.

I kinda lost track of The Coral after Bill Ryder Jones departed in 2007 however not only are they still boxing on but still releasing records and here in 2021 they give us a good old fashioned Concept Album. Ta Da !

The concept of this Concept Album roughly translates to the band recalling holidays on the West Coast of England from fun and innocence to ultimate decline through a fairly straight forward and linear telling that is interspersed with several short narrative sections throughout. Think Kinks ‘Village Green’ and you are on the right track

Reviews for this one has been mostly positive with even a couple of posters on Allmusic declaring a masterpiece. Trust me it’s far from a masterpiece with a hand full of downright stinkers here, however if you have the time to commit it’s well worth the effort

Your feedback for Coral Island