Friends That Break Your Heart (studio album) by James Blake 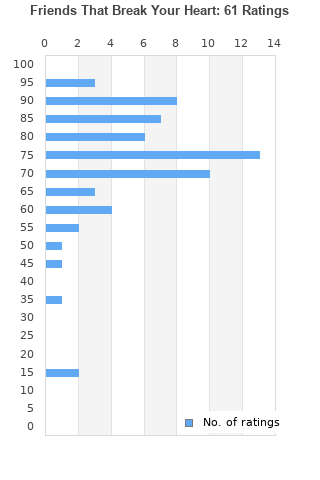 Friends That Break Your Heart is ranked 5th best out of 9 albums by James Blake on BestEverAlbums.com.

The best album by James Blake is James Blake which is ranked number 745 in the list of all-time albums with a total rank score of 2,488.

Listen to Friends That Break Your Heart on YouTube 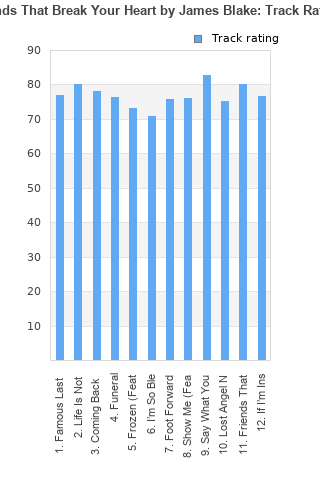 Friends That Break Your Heart rankings

Friends That Break Your Heart collection

Friends That Break Your Heart ratings

Rating metrics: Outliers can be removed when calculating a mean average to dampen the effects of ratings outside the normal distribution. This figure is provided as the trimmed mean. A high standard deviation can be legitimate, but can sometimes indicate 'gaming' is occurring. Consider a simplified example* of an item receiving ratings of 100, 50, & 0. The mean average rating would be 50. However, ratings of 55, 50 & 45 could also result in the same average. The second average might be more trusted because there is more consensus around a particular rating (a lower deviation).
(*In practice, some albums can have several thousand ratings)
This album has a Bayesian average rating of 74.2/100, a mean average of 72.1/100, and a trimmed mean (excluding outliers) of 74.4/100. The standard deviation for this album is 16.8.

Friends That Break Your Heart favourites

Friends That Break Your Heart comments

Generally speaking electronic music isn’t in my musical wheelhouse but there are a few exceptions and Blakey is certainly one of them having been a regular in my year end album lists since 2013’s ‘Overgrown’. ‘F.T.B.Y.H’ is something of the ultimate COVID document being conceived and recorded largely in lockdown as it deals with isolation, desperation and separation. As far as James Blake albums go this one’s remarkably upbeat considering the lyrical content (as far as upbeat for Blakey can be) and is another excellent release in a catalogue that continues to grow in depth of quality

Listen and be woke!

I have always had a soft spot for Blake’s music since 2010s Kelis and Aaliyah sampling ‘CMYK’ and his cover of Feists ‘Limit To Your Love’. However, I have often found his albums a little underwhelming.

Initial thoughts are that this is a stronger album. Some tracks veer into James Blake interpretations of the Arctic Monkeys and 2015 vintage Sufjan Stevens. This is no bad thing.

‘Say What You Will’ is a triumph.

Hearing Say What You Will got me more excited for this album than I'd ever have anticipated. Its one of the best tracks of the year and probably the best thing he's recorded, so to get to the album and have it be exactly the same as each of his other albums was absurdly disappointing. A good album for sure, impeccably produced, but still feels like he's on autopilot in ways.

Your feedback for Friends That Break Your Heart